Fear and frustration unite all on Ukraine’s dividing line

From vast queues to shellfire, travellers face grim ordeal when crossing the frontline

Daniel McLaughlin on the Mariinka-Donetsk road 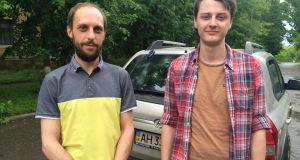 Dima Shibalov and Daniil Antonchik of the Responsible Citizens volunteer group, who were expelled by Russian-backed separatists from Donetsk in eastern Ukraine. The group continues its humanitarian work in government-controlled areas. Photograph: Daniel McLaughlin 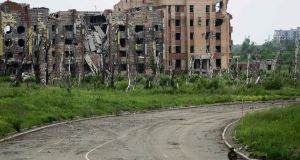 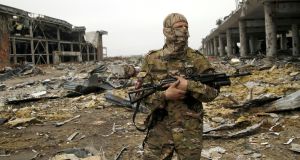 In better times, before war came to eastern Ukraine, Valentina must have enjoyed Sunday mornings like this.

“The cherries are already ripe at our dacha, so we’re going to pick them today,” she said, as a breeze ruffled her dress and took the edge off the heat.

“It used to only take us 20 minutes to get there from our flat,” she recalled, shaking her head at what she was about to say: “Now it’s a three-hour trip, and it feels like we’re going to another country.”

“Valentina” is not her real name – she refused to give that, for fear of problems with the authorities on one or other side of the checkpoints she was crossing, which mark the dividing line between government and separatist territory.

She stood behind a wire fence with scores of other bus passengers from the Russian-backed “Donetsk People’s Republic” (DNR), while hundreds of cars queued in both directions at the de-facto border.

It was only 8.30am, but some drivers said they had already been waiting there for three hours – and it would be several more before they were on their way.

Valentina pointed towards where she lives in the Petrovskyi area of Donetsk city, the separatists’ capital, visible a few kilometres away beyond fields and the hulking slag heaps that are now prime sniper positions in this coal-rich region.

Adjoining Petrovskyi district is Mariinka, a town just as depressed and shell-scarred as its neighbour, but controlled by the Kiev government – and so the two sit on different sides of the frontline between the army and the militants.

This so-called “contact line” is now synonymous for locals with the misery of getting through it – from obtaining permission to cross, to enduring document and luggage checks, and waiting in kilometres-long lines, sometimes for more than a day.

Tempers often fray and fists occasionally fly when people try to jump the queue. But far more dangerous are the nights when people have to sleep in their cars after the checkpoints close, and gun battles and artillery fire erupt nearby.

“I was stuck there once for 30 hours, with plenty of ‘fireworks’ going off,” said Vasya, who sells goods from government-held territory in Donetsk.

Yelena, another resident of the city, crosses the line at least once a month to visit relatives in the Kiev-controlled town of Kramatorsk – making a big loop around dangerous areas that doubles the length of the pre-war trip.

She said she slips the Ukrainian soldiers a 500 rouble (€6.60) bribe to get through as quickly as possible, but complained that they still “search everything in the car, even kids’ toys, as if they’re just trying to make problems for us”.

“But the worst time,” she recalled, “was when a car blew up and I was stuck at the checkpoint for one-and-a-half days.”

Part of the wrecked minibus still lies by the road, nearly four months after it hit a landmine while trying to skirt the queue, killing three people; aid groups are now stepping up mine-awareness work, and have given the army and militants warning signs to erect, and portable toilets to keep people out of the fields.

Regardless of the time lost and potential danger, however, most days some 25,000 people cross the contact line.

The legal and banking systems do not function in DNR so, as well as going to work or to see family, people visit government territory for a host of reasons: from withdrawing cash and collecting state pensions that are not paid in separatist areas; to processing and renewing official documents; to buying food and medicines that are cheaper, better quality and more easily available than in Donetsk.

For a growing number of locals, however, this “border” is firmly closed.

When Dima Shibalov last crossed the contact line, he was being “deported” by the separatists with two other founders of volunteer group Responsible Citizens, on vague charges of spying and threatening the security of the DNR.

Formed when the conflict began two years ago, the group shunned politics and focused on getting food and other essentials to the neediest people in the region, even when shelling of residential areas was at its worst.

As the DNR’s isolation grew, however, so did the paranoia of its security services, which disapproved of Responsible Citizens’ work with international aid groups and the charitable fund of controversial Donetsk billionaire Rinat Akhmetov.

On February 2nd, DNR investigators questioned the volunteers for six hours, took their computers and several cars, and gave them 15 minutes to pack and leave.

“It was 9pm when we reached the checkpoint, so it was closed for the night,” Shibalov recalled. “The Ukrainian troops fired warning shots above our heads, and we were stuck in no-man’s land until 1am before being allowed through.”

Another co-founder of Responsible Citizens, former Donetsk councillor Marina Cherenkova, was detained for more than three weeks before being expelled from DNR, and the group now operates only in Kiev-controlled areas.

“What do people in Europe say about what’s happening here?” asked a Ukrainian soldier guarding the contact line.

“Do they call this a civil war? Don’t they wonder where all the weapons on that side came from? How all this equipment - stuff that Ukraine’s army never had - suddenly turned up in this little place?”

He would not give his name, but said he was a 28-year-old from close to Khartsyzk, a town east of Donetsk that is under separatist control. School friends and relatives still live there, but he had no idea when, if ever, he would go home.

For him, the key to erasing this makeshift dividing line and its attendant misery lies 100km to the east, at an official frontier that has effectively vanished. “Close the border with Russia, ” he said, “and all this will be over in a month”.