Battle for soul of Europe is only beginning 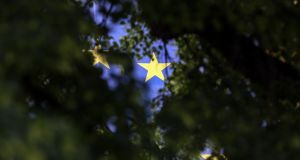 A hard choice looms between the path of further integration and consolidation, favoured by Macron, and the path of a “slimmer” and less politically ambitious Europe, favoured by Brexiteers and other nationalist parties. Photograph: Felipe Trueba

EU leaders undoubtedly breathed a collective sigh of relief as they surveyed the composition of the new EU parliament: although nationalist and Eurosceptical parties have made significant gains, the balance of power remains firmly on the side of more or less establishment-friendly parties. The dreaded populist upset has not materialised.

Pro-integration parties have enough votes to form a majority coalition in the EU parliament. This means that the EU can more or less trundle along as it is, at least for the time being.

Nonetheless, the steady gains of nationalist parties, led by Nigel Farage in the UK, Marine Le Pen in France and Matteo Salvini in Italy, cannot be easily dismissed, particularly given that France has given more seats to Le Pen’s Rassemblement National (National Rally) than any other party, representing a major setback for France’s pro-EU centrists led by Emmanuel Macron.

The gradual consolidation of nationalist and Eurosceptical parties, even if it does not reach a commanding position, is indicative of a brewing storm over the soul of Europe, over what the European Union really stands for. The current fracturing of European politics is symptomatic of a tension that has been latent in the European Union since its inception, between two very different visions of European integration.

On the one hand, there is the idea of Europe as a union of sovereign peoples. According to this idea, member states surrender only as much sovereignty as they choose to delegate to European institutions, to further common interests. But the bulk of political sovereignty remains in the hands of national parliaments, to be exercised on behalf of national citizens.

This was fundamentally the vision behind the European Economic Community, at least in its initial stages: a vision of international co-operation in the interests of peace and economic prosperity.

But this “union of peoples” vision of Europe sits uncomfortably alongside a very different vision of Europe as a democratic union of citizens. According to this vision, the EU should directly represent European citizens’ interests domestically and on the worldstage, functioning in ways that resemble a federal state such as the USA, with centralised control over welfare, immigration policy, taxation, public finance, military defence and foreign policy.

The seeds of a more consolidated union have been present from the very beginning, in the ideal of social justice and solidarity advocated by architects of the European project such as Jacques Delors.

But it was arguably the introduction of monetary union in 1992 that served as a powerful catalyst for greater political harmonisation between the policies of member states. For monetary union is only sustainable with a relatively high level of control by EU institutions over public finance and spending, requiring a significant renunciation of political and economic sovereignty by member states.

Macron, in a recent article published in newspapers across Europe, argued that in today’s globalised and interdependent world, Europe needs more centralised co-ordination over a host of areas, including defence, foreign policy, welfare policy, minimum wage, the environment and public finances.

EU leaders, in their failure to resolve these contradictions, have effectively laid the groundwork for the steady polarisation of Europe into two factions: one of which favours a concentration of a wide range of political and economic functions in European institutions; and the other, a looser, decentralised union of independent states.

Up to now, EU leaders have more or less fudged these tensions. But as public finances get tighter, welfare gets scarcer, and nationalist discourses gain momentum, voters may no longer buy the idea that Macron’s Europe of “pooled sovereignty” and a Europe of sovereign nations can be reconciled within the same political package.

Sooner or later, it will be necessary to make a hard choice between the path of further integration and consolidation, favoured by Macron, and the path of a “slimmer” and less politically ambitious Europe, favoured by Brexiteers and other nationalist parties.

Both paths entail significant risks. An attempt to drive forward the integration process may contribute to an even greater sense of powerlessness on the part of citizens as they see critical political functions removed from their national parliaments. Furthermore, at a time when nationalism appears to be gaining momentum, a move toward further political consolidation may potentially tear the European Union apart.

Any attempt, on the other hand, to restore the fiscal and political sovereignty of member states would likely destabilise Europe’s economy, at least in the short to medium term. For monetary union may be put in jeopardy if European institutions renounce their control over the public spending and finances of member states.

Sooner or later, EU leaders will have to get off the fence and decide which Europe they wish to back: a sovereign, federated union of citizens akin to the USA, or a union of sovereign nations.

1 Cork shooting tragedy: Postmortems to be carried out as community shocked by deaths in ‘well liked family’
2 Ciara Kelly: I was pregnant, unmarried, a junior doctor and I got old-school comments
3 Third person arrested in education board corruption investigation
4 The former Rose at the front line of US Covid-19 fight
5 ‘Shellshocked’: Outrage in Australia after women on flight strip-searched in Qatar
Real news has value SUBSCRIBE