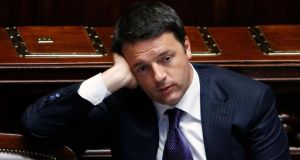 The political battle over the leadership of the European Commission promises to dominate the two-day summit of European Union leaders, which begins today. But behind the political manoeuvring of the past few weeks, a debate about economic policy has been taking place.

Could there be a shift in Europe’s strategy of fiscal consolidation that has characterised the EU’s economic policy over the last five years?

Indications that change could be afoot emanated this week not from Berlin, as might have been expected, but from Rome. On Tuesday, Italian prime minister Matteo Renzi delivered a fiery one-hour speech to parliament outlining a three-year legislative plan to boost the moribund Italian economy. His plan contains a strong European dimension.

Calling for “a light easing of the euro zone’s restrictive economic policies”, Renzi specifically cited Germany a number of times, alluding to the country’s flouting of EU deficit rules a decade ago.

“Like Germany back then, we want to stop receiving the recommendations like a shopping list,” Renzi said. “It’s almost like this transforms Europe into an old, boring aunt who tells us what to do.”

Nonetheless his intervention was significant. As the euro zone crisis has subsided, concern in Brussels has shifted to some of the euro zone’s larger economies, particularly France and Italy, which did not have the pressure of a bailout programme to ensure economic reforms.

Europe’s second- and fourth-largest economies were both reprimanded by the European Commission earlier this month, with France urged to introduce further spending cuts and Italy advised to tackle its public debt levels. With a debt to GDP ratio of more than 130 per cent, Italy has long been grappling with one of the highest public debts in the EU.

While France has tempered its very public diplomatic altercations with the commission over budget rules in recent months, Italy’s energetic new premier may be ready to fly the flag for austerity-weary states, particularly as Italy assumes the six-month rotating presidency of the EU council.

The summit of centre-left leaders and senior political figures from across Europe, hosted by French president François Hollande last Saturday – seen by many as a rejoinder to the gathering of four centre-right leaders held a week earlier in Sweden – has succeeded in building a certain political momentum behind a call for more fiscal flexibility.

Just as the formation of national coalition governments is a good time to negotiate political concessions, as every good politician knows, the coming weeks in EU politics offer an opportune moment for centre-left governments to lobby for change as the shape of the new European institutions emerges and top jobs are allocated.

Already, centre-left parties agreed to endorse centre-right candidate Jean-Claude Juncker at their “mini-summit” in Paris, in exchange for a possible easing on austerity, as well as a claim on some of the other top EU jobs.

Whether the EU is prepared to relax the rules-based system that defined economic policy during the euro zone crisis is another question. In an article for Sueddeutsche Zeitung on Tuesday, German Bundesbank chief Jens Weidman argued that fiscal rules on government debt and deficits in the euro area should be strengthened.

Nonetheless, European Council president Herman Van Rompuy may have taken the concerns of Renzi and others on board.

In a paper circulated earlier this week, he called for a discussion on the policy direction of the next European Commission, noting “public disenchantment with European politics.” He called for the “full use” of the “built-in flexibility” embedded in the Stability and Growth Pact.

All this is good news for austerity-wearing countries and the millions of citizens who expressed disenchantment with the EU in the European elections, some of whom would likely use stronger language than Renzi in his description of the EU as a “boring old aunt.”

The possibility that bigger countries might win flexibility on debt and deficit targets may also bode well for Ireland’s plan to implement less that €2 billion in savings in next year’s budget.