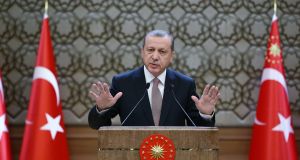 EU leaders, including Taoiseach Enda Kenny, gather in Brussels on Sunday for an EU-Turkey summit on the refugee crisis. Even before the downing of a Russian jet this week by the Turkish military, the meeting was expected to be controversial.

Under discussion is a €3 billion financial package in exchange for a commitment that Turkey will stem the exodus of refugees leaving for the European Union. Critics are calling the policy an unashamed attempt by the EU to outsource the refugee crisis to Turkey.

Turkey’s relationship with the EU has long been a source of tension in the bloc. Although accession negotiations opened in 2005, little concrete progress has been made.

Of the 35 accession chapters, 13 have been opened and only one – the file which covers science and research – has been closed. Despite talk of engagement, strong political resistance exists to the idea of Turkish EU membership.

The increasingly autocratic tendencies of President Tayyip Erdogan in recent years have added to fears about Turkey’s democratic credentials. Just this week two journalists were arrested after they published images which allege to show Turkey’s intelligence agency shipping weapons to Syria.

An annual analysis by the European Commission on Turkey’s accession status published earlier this month criticised the state’s respect for the rule of law and fundamental rights. The report also pointed to shortcomings affecting the judicial system, freedom of expression and of assembly.

But the refugee crisis, which has seen hundreds of thousands of displaced people enter Europe this year, has prompted the EU, particularly Germany, to engage with Ankara.

European Commission vice president Frans Timmermans has been negotiating with the Turkish government in recent weeks to hammer out a deal ahead of the summit. The talks were described as “difficult” according to senior officials in Brussels, with Erdogan not expected to attend. Instead prime minister Ahmet Davutoglu is to travel to Brussels.

Under the “action plan” to be discussed, a €3 billion financial package will be offered to help Turkey deal with some 2 million Syrians in temporary protection. Turkey will commit to improve the registration of migrants and clamp down on people smugglers.

Ireland is expected to contribute about €28 million to the fund, according to the European Commission, though a final decision on how the package will be funded has not yet been made.

The commission will open up dialogue on visa-free travel rights for Turks to the EU. It has also pledged to accelerate accession negotiations, with reports from Ankara suggesting talks on Chapter 17, which deals with economic and monetary issues, will open in Brussels next month.