EU states to take 40,000 migrants from Italy and Greece 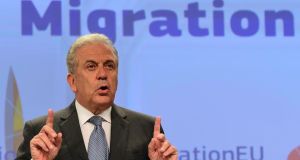 EU migration commissioner Dimitris Avramopoulos at a press conference in Brussels on Wednesday to announce plans for other EU member states to take 40,000 migrants from Italy and Greece. Photograph: Emmanuel Dunand/AFP/Getty Images

Other EU member states will accept 40,000 migrants from Italy and Greece over the next two years under proposals announced by the European Commission on Wednesday, though Ireland, Britain and Denmark retain an opt-out from the legislation.

Two weeks after the European Commission announced a wide-ranging plan to tackle the migration crisis unfolding in the Mediterranean, the EU’s executive arm presented a fine-tuned package, including a proposal that would oblige member states to take 24,000 Syrian and Eritrean migrants from Italy and 16,000 from Greece over the next two years.

This is in addition to the proposal to resettle 20,000 migrants from outside Europe within the European Union in the next two years.

While Ireland remains committed to the plan announced earlier this month to resettle an extra 300 migrants over the next two years, the Government has not yet decided whether to opt-in to the relocation plan. Ireland, along with Britain, has automatic opt-outs of most EU justice and home affairs legislation. The commission’s proposal to redistribute migrants who have already arrived on European shores must be approved by member states, but has so far met resistance from a number of countries including France, Spain and Hungary.

The proposal marks the first time the commission has invoked Article 78.3 of the EU treaties, which allows the EU to adopt provisional measures in the event of “one or more member states being confronted with an emergency situation characterised by a sudden inflow of nationals of third countries”. The migration crisis in the Mediterranean has seen an upsurge in foreign migrants attempting to cross into Europe, prompting calls on the EU to take decisive action to address a crisis that has already resulted in thousands of deaths at sea this year.

But the move to distribute migrants who arrive in one country across other EU states risks tampering with the so-called Dublin convention, which obliges migrants to apply for asylum in the country where they first arrive.

Under the scheme announced on Wednesday, asylum applications of those relocated within the EU will be processed in the country that receives the re-distributed migrants. Announcing the proposal in Brussels, the EU commissioner for migration Dimitris Avramopoulos said the proposal was “one more step forward” on tackling migration. “The European Commission has shown it can act quickly and firmly to better manage migration. We are taking concrete action,” he said.

In parallel, the commission announced plans to clamp down on migrant smuggling, including co-operating with internet and social media companies to identify and remove internet content used by smugglers to advertise their activities.

Addressing the European Parliament in Brussels on Wednesday, UN secretary general Ban Ki-moon welcomed the commission’s proposal to relocate 40,000 asylum-seekers as a step in the right direction.

“Successful burden-sharing can enable the European Union to address the dramatic increase in flows of people, while setting an example for others regions of the world facing similar challenges,” he said.

Mr Ban said he had met with re-settled refugees from Burma, Democratic Republic of Congo and elsewhere during his visit to Ireland earlier this week. “Their new lives are not with difficulties, but they have found safety and their new home is glad to have extended a helping hand,” he said.

He added that saving lives should be the priority of the EU in its response to migration. “While we need to see more effective law enforcement actions against the traffickers and smugglers, we also need safe alternatives to dangerous voyages as well as legal channels such as resettlements, family reunification and work and study programmes.”

One year on: Coming from Wuhan is now a source of pride but many remain wary 10:30
Covid-19: Hong Kong locks down thousands for compulsory testing 07:56
Trump impeachment trial set to loom over Biden’s first weeks in office 00:33
UK Covid-19 variant may be 30% more deadly, Boris Johnson says 20:16
Belgium bans all non-essential trips as EU moves to curb travel 19:53