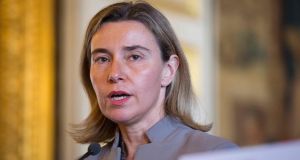 The announcement by Russia that it would withdraw troops from Syria was almost as surprising as its original decision six months ago to intervene in the country.

Just as Vladamir Putin caught the international community unaware last September by announcing the deployment of the Russian air force in Syria, this week the Russian president again took the West by surprise by declaring it would pull out its main military force.

British foreign secretary Philip Hammond admitted he had “no insight at all into Russia’s strategy”; the White House said it had not been given advance notice of the move.

The international community has so far given a guarded welcome to the development. The UN special envoy to Syria, Staffan de Mistura, described the move as a “significant development” towards resolving the Syrian conflict. US secretary of state John Kerry, who is due to visit Moscow next week, said it marked “a very important phase in this process”, adding that “we may face the best opportunity that we’ve had in years” to end the Syrian civil war.

As it happens, the developments in Syria coincided with what could be the beginning of a shift in European Union policy towards Russia.

Just hours before the Russian announcement, EU foreign ministers met for a scheduled meeting in Brussels.

For the first time in a year, Russia was on the agenda, with EU high representative for foreign affairs Federica Mogherini pushing for a general discussion, rather than a consideration of the EU’s sanctions policy.

Almost two years since the EU imposed sanctions on Russia following the annexation of Crimea, some member states are questioning how long these measures will be in place.

While the EU agreed to extend asset freezes and travel bans on some individuals and companies this month, the question of extending the more broad-based sectoral sanctions up for renewal in July will be trickier.

Italy, along with Greece, Cyprus and Hungary, are among those countries most sceptical of the sanctions regime, in contrast to the Baltic states which are most in favour. To date the EU has managed to keep the debate about sanctions exclusively linked to the implementation of the Minsk agreement rather than bound up with Russia’s involvement in other foreign policy issues such as Syria or Iran.

But the call for a reappraisal of the sanctions regime is not only coming from member states. While EU foreign ministers were meeting on Monday, agriculture ministers in the same building agreed to temporary measures to curb milk production as a response to falling milk prices, a consequence in part of Russia’s reciprocal ban on certain EU products.

Farmers, particularly in France, have argued that they should not be unfairly affected by foreign policy decisions over which they have no control.

How far the economic costs of the EU’s sanctions regime will weigh on the sanctions decision is unclear – ultimately there is relatively broad consensus across the EU on the need to extend the sanctions in July, though some countries could push for a shorter extension. Member states are also likely to take their lead from France and Germany, which are leading negotiations on the Minsk agreement through the so-called Normandy format.

One other development that could weigh on the decision is developments in Ukraine. The political crisis in the country is beginning to cause concern in Brussels. As one senior EU diplomat put it, the EU could be faced with a situation whereby Russia and the separatists fulfil their demands under Minsk, while the government in Kiev does not.

While a decision on the rollover of sanctions is still some way off, this week’s meeting of foreign ministers was significant in its endorsement of a new “strategic engagement” between the EU and Turkey.

Mogherini said there had been “unanimous agreement” on a selective engagement with Russia, a move that recognises that EU countries already bilaterally engage with Russia in various ways, despite the sanctions regime.

“We engage already with Russia on all foreign policy issues; we decided also to engage on selective issues that are of interest to the EU,” she said, adding that this could include diplomatic contacts.

Whether this is paving the way for a more broad-based co-operation between the European Union and Russia is likely to become clear in the coming months.