EU Council President Donald Tusk says that after weeks of negotiations an agreement has been reached for a new resettlement scheme for refugees arriving in Turkey. Video: EU Council 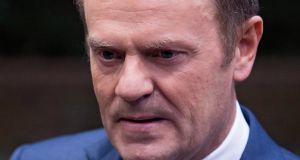 The European Commission is to draw up plans for a new resettlement scheme for refugees arriving in Turkey, after German chancellor Angela Merkel backed the initiative at a meeting of a sub-group of EU countries in Brussels.

Leaders of eight EU countries – including Austria, Luxembourg and Greece – met ahead of the EU leaders’ summit in Brussels on Sunday at which the idea of a relocation scheme that would see EU countries accepting migrants directly from Turkey was discussed.

The surprise “mini-summit”, which was convened by the German chancellor, was largely seen as an attempt to sidestep east European countries which have been vocally opposed to the idea of quota systems for refugees.

Although the European Commission will present a proposal for the scheme in December, it is not expected to be mandatory. The German chancellor insisted after the summit that the core group of EU countries “did not come to any definitive position” on the proposal.

“We didn’t talk about any specific numbers,” she said, noting that the quota idea was one supported by Turkey.

The wide-ranging agreement will also see Turkey’s 75 million people gain visa-free access to the Schengen area by October 2016 if certain conditions are met.

As non-Schengen members the visa liberalisation package will not apply to the UK and Ireland.

While the EU committed to a €3 billion financial package, the detail of how the package will be funded will be worked out in Brussels in the coming weeks. The European Commission has proposed that €500 million will be provided by the EU budget, with the remaining €2.5 billion provided by member states based on a distribution key. This would see Ireland contributing €28.5 million, Germany contributing €534 million and Britain providing €410 million. But a number of member states are pushing for greater contribution from the existing EU budget.

In addition, the EU agreed to open up a number of accession chapters with Turkey, a move that was welcomed by Ankara which has previously voiced frustration at the pace of EU-Turkey membership negotiations. While the EU officially opened accession talks with Turkey in 2005, the talks have made little progress. Negotiations on Chapter 17, which deals with economic and monetary matters, will begin on December 14th, while preparatory work on opening other chapters will commence.

The EU and Turkey will “step up their active co-operation on migrants who are not in need of international protection”, the leaders agreed. EU Council president Donald Tusk said reviving the negotiations was not about “re-writing the EU enlargement policy”.