EU must not leave Asian relations to the US

Opinion: For the most part, European states have no security presence in Asia 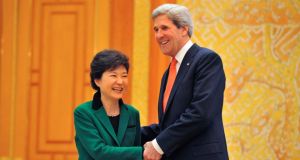 Under the Obama administration, US policy has rebalanced or pivoted towards Asia.

This week’s failure by the European Council to appoint a new high representative for the European Union’s foreign and security policies was partly caused by competing views on how to deal with Russia’s sponsoring of secessionist movements in Ukraine. Their shooting down of the Malaysian plane dramatically reinforces that issue.

But the understandable concentration on the EU’s immediate neighbourhood should not obscure the wider challenges facing this role in the midst of larger geopolitical change. One of the priorities identified by the council for the next five years is the development of a more effective EU foreign and security policy. It must take account of changing European relations with the United States and whether the EU will develop its own policies towards other world regions or continue to work closely with the US on them.

The most important region in this respect is Asia. Under the Obama administration, US policy has rebalanced or pivoted towards Asia in recognition of China’s rapid rise and the whole region’s growing importance economically. While defence and military initiatives have captured headlines and are undoubtedly important in reinforcing existing US alliances with Asia states, there is a deeper thrust involved.

It raises the question of whether the transatlantic relationship so important in the post-war period is now changing as the US loses its hegemony and other poles of power emerge. Divergent interests and values between Europe and the US affect this picture, even though there are many reasons to think they will continue to work together, since they remain the most wealthy, powerful and influential regions, all of which reinforce their joint primacy.

In addition, those who advocate more of an EU diplomatic presence in Asian security forums, even if it is accepted that it cannot be a security actor there, point out that the increased global presence of Asian powers like China in Africa and the EU’s neighbourhood, implicates Europe in Asian security concerns and competition on food, energy resources, minerals, raw materials, commodities and climate change.

Hard power shifts towards soft power in this debate. Knowing that the EU has no 7th Fleet in Asia and assuming it cannot have a military role is not to say it cannot or should not be a political actor in the region. Critics advocating a more active role say it suffers from a triple hierarchy of policy shortcomings. Trade is given too much priority over other issues; China is over-emphasised over other Asian actors; and national interests led by Germany, the UK and France predominate over common EU ones.

But given that the EU accounts for 30 per cent of global trade, 50 per cent of global gross domestic product outflows and 40 per cent of inflows, it is still recognised as a major economic player in Asia. It has an opportunity to develop closer trade relations, and emphasise bilateral and multilateral relations with individual states and with Asean, including on the appeal of regional integration put forward less as a model but as an experiment in co-operation among states and peoples.

Ecological security, maritime safety, disaster management, climate change, energy co-operation and environmental protection are all areas of non-traditional security worth emphasising by the EU’s still-developing External Action Service. Much of its large-scale development aid is underappreciated in Asia. Asian interests in the euro as an alternative reserve currency to the dollar and in Europe as a source of different values to US hegemonic ones are strong reasons from their side to strengthen the relationship.