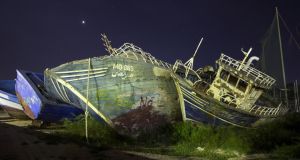 The wreckage of migrant vessels is lit by passing cars at twilight on April 24th, 2015 on the island of Lampedusa, Italy. Photograph: Dan Kitwood/Getty Images

European efforts to save the lives of migrants drowning in the Mediterranean must involve search-and-rescue operations near the shores of Libya, Amnesty International said on Saturday as hundreds more people arrived in Italy from North Africa.

It comes as more than 300 people were brought to the Sicilian port of Augusta on Saturday afternoon and rescue workers in white protective suits began helping them ashore.

The European Union was shocked into action last week by a shipwreck that killed more than 700 people, and pledged to triple the budget of its sea mission which had replaced a more comprehensive Italian operation.

But differences of opinion over immigration policy mean the EU’s Operation Triton does not have an explicit mandate to search for and rescue migrants near the Libyan coast, where Italy’s now-defunct Mare Nostrum did much of its work last year.

“We only see that mission patrolling right around the borders of Italy. But all these boats that we have seen go down have been going down further afield, so closer to Libya, and these boats are simply not reaching that area,” said Amnesty International’s deputy manager for Europe, Gauri Van Gulik.

Last weekend’s shipwreck nearly doubled the death toll at sea this year so far to more than 1,800 and is thought to be the deadliest disaster in decades of migration on the Mediterranean.

The alleged captain of the doomed ship, a Tunisian, is accused of causing the fishing boat to collide with a Portuguese merchant ship coming to its assistance.

Passengers are thought to have rushed to one side of the boat, causing it to sink.

The brother of the accused man told Reuters on Saturday that he was himself a migrant and had been forced at gunpoint to pilot the ship because he had experience as a fisherman.

Ms Van Gulik said the rescue process posed its own dangers and many of the merchant vessels directed by the coastguard to help boats in difficulty lacked the right equipment and training to carry out safe rescues.

“Even though it is heroic, of course, what they are doing, this is causing boats to capsize because, for example, there is panic on board ... and it is causing a lot of the deaths that we are seeing,” she said in the Sicilian port city of Catania.

Italy’s coastguard said late on Friday it had rescued 228 migrants in two operations about 40 miles from the Libyan coast, and had co-ordinated the rescue of 80 other people from fishing boats in Tunisian waters.