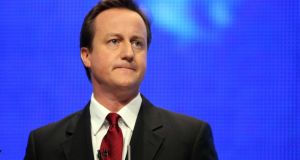 British prime minister David Cameron: has indicated he may seek to secure a cap on migrants entering Britain from within the EU. Photograph: Christopher Furlong/Getty Images

Jean-Claude Juncker threw down the gauntlet to British prime minister David Cameron yesterday, warning that EU freedom of movement rules would not be changed.

Speaking at the European Parliament in Strasbourg, where MEPs voted in favour of the new European Commission, Mr Juncker said he supported a “fair deal” for Britain but warned freedom of movement laws would not be changed.

“Freedom of movement is a basic principle of the European Union since the very beginning and I’m not prepared to change this,” Mr Juncker said.

Mr Cameron has indicated he may seek to secure a cap on migrants entering Britain from within the EU, as he endeavours to soothe Conservative Party concerns over immigration amid rising support for the UK Independence Party. The British prime minister said he favours staying within the EU, but only on revised terms, ahead of a planned referendum on EU membership in 2017 should the Conservatives win next May’s election.

The Juncker commission was approved by 423 to 209 votes, with 67 abstentions, with the three main political groups, European People’s Party (EPP), Socialist and Democrats (S&D) group and liberal group Alde, in favour. It is understood Sinn Féin’s three MEPs voted against.

The ratification means the new commission, including Irish commissioner Phil Hogan, will assume their positions on November 1st.

Speaking in the chamber, Guy Verhofstadt, the leader of Alde, said while his group was supporting the Juncker commission, it was not giving its support “for free”. He said his group wanted a European Commission “with ambition, with a vision”, criticising the Barroso commission which had “waited for the green light from Paris and Berlin”.

Addressing MEPs on his priorities, Mr Juncker said he would reveal details of his €300 billion investment plan for Europe by the end of the year. Noting that investment “can’t be financed by further expanding debt”, he said public money had to be used in an “intelligent way” while private money had to be leveraged.

Mr Juncker’s comments come as France and Italy continue their battle with the commission on their 2015 budgets, with France already indicating it will miss its EU budget deficit targets by another two years. Both France and Italy are calling on Germany and the European Commission to support greater flexibility in the application of the EU’s fiscal rules.