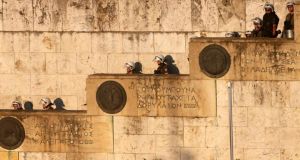 Greek riot police officers stand guard on the steps in front of the Parliament building during an anti-austerity demonstration in Athens, Greece, July 12th, 2015. Euro zone leaders told near-bankrupt Greece at an emergency summit on Sunday that it must restore trust by enacting key reforms before they will open talks on a new financial rescue to keep it in the European currency area. Photograph: Jean-Paul Pelissier/Reuters

Euro zone leaders at a summit in Brussels were reviewing a draft proposal from their finance ministers on Sunday that sets out conditions for Greece to open negotiations on a bailout.

The following is the draft of the paper, seen by Reuters. Phrases contained within square brackets were not yet agreed by all 19 states:

Given the need to rebuild trust with Greece, the Eurogroup welcomes the commitments of the Greek authorities to legislate without delay, by July 15, a first set of measures. These measures, taken in full prior agreement with the institutions, will include:

- the streamlining of the VAT system and the broadening of the tax base to increase revenue;

- upfront measures to improve long-term sustainability of the pension system as part of a comprehensive pension reform programme;

- the adoption of the Code of Civil Procedure, which is a major overhaul of procedures and arrangements for the civil justice system and can significantly accelerate the judicial process and reduce costs;

- the safeguarding of the full legal independence of ELSTAT;

- full implementation of the relevant provisions of the Treaty on Stability, Coordination and Governance in the Economic and Monetary Union, in particular by making the Fiscal Council operational before finalising the MoU and introducing quasi-automatic spending cuts in case of deviations from ambitious primary surplus targets after seeking advice from the Fiscal Council and subject to prior approval of the institutions;

- the transposition of the BRRD at the latest within a week with support from the European Commission.

Immediately, and only subsequent to legal implementation of the above-mentioned measures as well as endorsement of all the commitments included in this document by the Greek Parliament, may a decision to mandate the institutions to negotiate a Memorandum of Understanding (MoU) be taken. This decision would be taken subject to national procedures having been completed and if the preconditions of Article 13 of the ESM Treaty are met on the basis of the assessment referred to in Article 13.1.

In order to form the basis for a successful conclusion of the MoU, the Greek offer of reform measures needs to be seriously strengthened to take into account the strongly deteriorated economic and fiscal position of the country during the last year.

The Greek government needs to formally commit to strengthening their proposals in a number of areas identified by the institutions, with a satisfactory clear timetable for legislation and implementation, including structural benchmarks, milestones and quantitative benchmarks, to have clarity on the direction of policies over the medium-run. They notably need, in agreement with the institutions, to:

- carry out ambitious pension reforms and specify policies to fully compensate for the fiscal impact of the Constitutional Court ruling on the 2012 pension reform and to implement the zero deficit clause or mutually agreeable alternative measures by October 2015;

- adopt more ambitious product market reforms with a clear timetable for implementation of all OECD toolkit I recommendations, including Sunday trade, sales periods, pharmacy ownership, milk, bakeries, [over-the-counter pharmaceutical products in a next step], as well as for the opening of macro-critical closed professions (e.g. ferry transportation). On the follow-up of the OECD toolkit-II, manufacturing needs to be included in the prior action;

- on energy markets, proceed with the privatisation of the electricity transmission network operator (ADMIE) [, unless replacement measures can be found that have equivalent effect on competition, as agreed by the institutions];

- on labour markets, undertake rigorous reviews of collective bargaining, industrial action and collective dismissals in line with the timetable and the approach agreed with the institutions. [In addition, the Greek authorities shall modernize the legislative framework for collective dismissals, in line with best practice]. On the basis of these reviews, labour market policies should be aligned with international and European best practices, and should not involve a return to past policy settings which are not compatible with the goals of promoting sustainable and inclusive growth;

- adopt the necessary steps to strengthen the financial sector, including decisive action on non-performing loans and measures to strengthen governance of the HFSF and the banks, in particular by eliminating any possibility for political interference especially in appointment processes.

On top of that, the Greek authorities shall take the following actions:

- to develop a significantly scaled up privatisation programme with improved governance. [The Greek authorities will invite an independent body to assess the price of assets sold and will investigate the best way to further increase the independence of TAIPED with the involvement of the Commission.]

Or [Moreover, valuable Greek assets of (€50 billion) shall be transferred to an existing external and independent fund like the Institution for Growth in Luxembourg, to be privatised over time and decrease debt. Such fund would be managed by the Greek authorities under the supervision of the relevant European institutions;]

- to fully normalise working methods with the institutions, including the necessary work on the ground in Athens, to improve programme implementation and monitoring. The government needs to consult and agree with the institutions on all draft legislation in relevant areas with adequate time before submitting it for public consultation or to Parliament. The Eurogroup stresses again that implementation is key, and in the context welcomes the intention of the Greek authorities to request by July 20 support from the institutions and Member States for technical assistance, and asks the European Commission to coordinate this support from Europe;

- [finally, to amend or compensate for “roll-back” legislation adopted during 2015, which have not been agreed with the institutions and run counter to the commitments agreed in the framework of the Feb. 20, 2015 Eurogroup statement.]

The above-listed commitments are minimum requirements to start the negotiations with the Greek authorities. However, the Eurogroup made it clear that the start of negotiations does not preclude any final possible agreement on a new ESM programme, which will have to be based on a decision on the whole package (including financing needs, debt sustainability and possible bridge financing).

The Eurogroup takes note of the possible programme financing needs of between €82 and €86 billion, as assessed by the institutions. The Eurogroup invites the institutions to explore possibilities to reduce the financing envelope, through an alternative fiscal path or higher privatisation proceeds. Restoring market access, which is an objective of any financial assistance programme, lowers the need to draw on the total financing envelope. The Eurogroup takes note of the urgent financing needs of Greece which underline the need for very swift progress in reaching a decision on a new MoU: these are estimated to amount to €7 billion by July 20 and an additional €5 billion by mid-August.

The Eurogroup acknowledges the importance of ensuring that the Greek sovereign can clear its arrears to the IMF and to the Bank of Greece and honour its debt obligations in the coming weeks to create conditions which allow for an orderly conclusion of the negotiations. The risks of not concluding swiftly the negotiations remain fully with Greece. The Eurogroup will discuss these issues as a matter of urgency.

Given the acute challenges of the Greek financial sector, the total envelope of a possible new ESM programme would have to include the establishment of a buffer of €10 to €25 billion for the banking sector in order to address potential bank recapitalisation needs and resolution costs, of which €10 billion would be made available immediately in a segregated account at the ESM.

The Eurogroup is aware that a rapid decision on a new programme is a condition to allow banks to reopen, thus avoiding an increase in the total financing envelope. The ECB/SSM will conduct a comprehensive assessment after the summer. The overall buffer will cater for possible capital shortfalls following the comprehensive assessment after the legal framework is applied.

There are serious concerns regarding the sustainability of Greek debt. This is due to the easing of policies during the last 12 months, which resulted in the recent deterioration in the domestic macroeconomic and financial environment.

The Eurogroup recalls that the euro area Member States have, throughout the last few years, adopted a remarkable set of measures supporting Greece’s debt sustainability, which have smoothened Greece’s debt servicing path and reduced costs significantly. [Against this background, in the context of a possible future ESM programme, and in line with the spirit of the Eurogroup statement of November 2012, the Eurogroup stands ready to consider possible additional measures to smoothen Greece’s debt servicing path even further, if necessary, to assure that gross financing needs remain at a sustainable level. These measures, including possible longer grace and repayment periods, will be conditional upon full implementation of the measures to be agreed in a possible new arrangement with Greece and will be considered after positive completion of the first review.]

The Eurogroup stresses that haircuts on the debt cannot be undertaken.

The Greek authorities reiterate their unequivocal commitment to honour their financial obligations to all their creditors fully and timely.

[Provided that all the necessary conditions contained in this document are fulfilled, the Eurogroup and ESM Board of Governors may, in accordance with Article 13.2 of the ESM Treaty, mandate the institutions to negotiate a new ESM programme, if the preconditions of Article 13 of the ESM Treaty are met on the basis of the assessment referred to in Article 13.1.]

[In case no agreement could be reached, Greece should be offered swift negotiations on a time-out from the euro area, with possible debt restructuring.]”