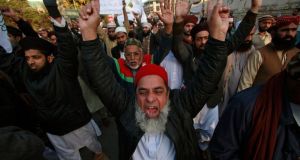 Men in Lahore, Pakistan, chant slogans on January 15th, 2015, as they protest against satirical French weekly newspaper Charlie Hebdo, which featured a cartoon of the Prophet Muhammad as the cover of its first edition since an attack by Islamist gunmen. Photograph: Mohsin Raza/Reuters

Kamal Belaidi is one of nearly 60 people arrested across France on charges of “defending terrorism”. Dead drunk, Belaidi (34) refused to take an alcohol test and insulted police who came to the site of an incident he caused on the night of January 11th.

“The terrorists were right to shoot you in Paris,” Belaidi shouted. “There should be more Kouachi brothers . . . Allah Akbar!” The Kouachi brothers killed 12 people, including two policemen, in their January 7th attack on Charlie Hebdo magazine.

A court in Valenciennes sentenced Belaidi to four years in prison. He had 16 earlier convictions, and “defending terrorism” was seen as an aggravating circumstance.

A drug dealer in Strasbourg who posted a photograph of a Kalashnikov and bullets with a hand-scrawled message saying “Kisses from Syria. Bye bye Charlie!” on his Facebook page will be tried on January 27th. He says it was “a bad joke”, but risks up to seven years in prison and €100,000 in fines, because his offence was committed on the internet.

The 14-year-old schoolgirl who told a ticket inspector on the tram in Nantes: “We’re the Kouachi sisters. We’re going to get our Kalashnikovs out,” may also be charged with “defending terrorism”.

Because her threat was made verbally, not on the internet, she risks only five years in prison and a €75,000 fine.

Most of the latter are of North African Arab or black African Muslim origin.

A six-page police report obtained by Le Parisien newspaper reveals details of some of 200 incidents reported by teachers. Large numbers of students refused to observe a minute’s silence for the Charlie Hebdo victims. Some demanded a minute’s silence for Palestinians. A 12-year-old told a supervisor, “We’re going to Kalash everyone.”

The government has called for zero tolerance in enforcing the November 2014 law against defending terrorism, and for renewed efforts to inculcate the ideals of secularism in French schools.

The Nobel laureate for literature JMG Le Clézio is a rare exception, telling his daughter in an open letter in Le Monde that the real war in France is “against injustice, against the abandonment of certain youths, against deliberately forgetting a part of the population . . . by not sharing the benefits of culture and chances of success”.

The 1789 universal declaration of human rights defines freedom of expression as “one of the most precious rights of man”. But French laws proscribe slander and defamation, defending war crimes, crimes against humanity or terrorism, or provoking discrimination, hatred or violence against people because of their race, religion or origins.

Some perceive the wave of arrests for “defending terrorism” as a witch-hunt, and the uneven enforcement of legislation as blatant double standards.

More than a dozen intellectuals signed an opinion piece in Le Monde denouncing the “selective indignation” of world leaders who marched in protest at the Paris killings, but condoned the destruction of Iraq and Israeli assaults that claimed thousands of lives in Gaza.

A recurring question is why Charlie Hebdo is allowed to publish cartoons ridiculing Muslims, while the anti-Semitic comedian Diéudonne has been repeatedly convicted for hate speech.

Diéudonne was jailed on Wednesday for having written “I feel like Charlie Coulibaly” on his Facebook page. He will appear in criminal court on February 4th.

A black rights group complained after Philippe Tesson, a respected, ageing French journalist, told Radio Classique that Diéudonne is “a filthy beast” whom he “would be happy to see shot by a firing squad”.

French commentators speak disparagingly of “chicken” and “hypocritical” US media who dare not publish the Charlie Hebdo cartoons.

The Turkish prime minister Ahmet Davutoglu called this week’s issue of Charlie Hebdo “a grave provocation” and said that “freedom of the press does not mean freedom to insult”.

When such reactions are reported by French media, it is never mentions this week’s cover cartoon of Muhammad includes two phalluses.

“I have the impression we are doing everything to fan hatred against us, so that more terrorists rise up against us tomorrow,” says the philosopher Chantal Delsol.

But for the novelist Michel Houellebecq, provocation is an inalienable right. “Freedom of expression must not stop before what anyone regards as sacred, or even take account of it,” Houellebecq writes in Les inrockuptibles magazine.

“Freedom has the right to throw petrol on the flames. It’s not meant to maintain social cohesion or national unity. One shouldn’t tell freedom to be responsible; it is not. This is not negotiable.”