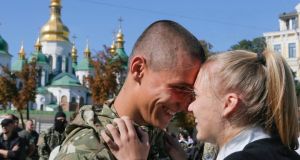 Friends and relatives reunite with soldiers of the Ukrainian volunteer special police battalion ‘Azov’ after they returned following their turn of deployment in eastern Ukraine, near the St Sophia Cathedral in Kiev. Nato has reportedly started delivering weapons to Kiev’s military as it battles Russian-backed separatists. Photograph: Sergey Dolzhenko/EPA

Deadly shelling has rocked eastern Ukraine’s fragile ceasefire, as Nato states launched exercises in the west of the country and reportedly started delivering weapons to Kiev’s military as it battles Russian-backed separatists.

Artillery fire continued to strike residential districts around Donetsk airport yesterday, in a resurgence of hostilities that the government and insurgents blame on each other. Kiev said six people were killed and 15 injured in rebel-held Donetsk.

The militants said government forces had fired on their positions more than 40 times over the previous day, killing 20 people, and accused Kiev of failing to swap prisoners on a “one-for-one” basis, as agreed in a September 5th ceasefire deal.

“The government in Kiev is only using the ceasefire to regroup its forces and attack us again. We will not allow that,” said Alexander Zakharchenko, premier of the self-declared Donetsk People’s Republic.

Ukraine’s defence minister Valeriy Heletey said about 3,500 Russian troops were still in the country, and 25,000 more were near the frontier.

Moscow denies helping the rebels, despite its soldiers being killed, injured and captured in the country and the US and Nato presenting satellite imagery that allegedly shows Russian armour crossing and firing over the border.

The Kremlin has denounced the imposition of EU and US sanctions, and accuses Washington and Nato of stoking the crisis in Ukraine to boost their influence and ruin relations between Europe and Russia.

Nato secretary general Anders Fogh Rasmussen said yesterday that Russian leader Vladimir Putin had “trampled all the rules and commitments” that preserved peace in Europe for decades, by annexing Crimea and intervening in eastern Ukraine.

“My concern is that it is in Russia’s interests to establish new, protracted, frozen conflicts in the region,” he said.

“Russia has used economic pressure and military action to produce instability, to manufacture conflicts and to diminish the independence of its neighbours.”

Mr Rasmussen spoke as 1,100 troops from Nato states including the US, Britain, Canada and Germany – as well as the former Soviet states of Georgia, Moldova and Azerbaijan – launched exercises in western Ukraine.

A statement from the US, which is leading the 11-day “Rapid Trident” exercise, said it would focus on peacekeeping and stability operations, including countering improvised explosive devices, convoys, and patrolling.

At the weekend, Russia sent a second convoy of trucks into rebel-held eastern Ukraine, without Kiev’s permission. Moscow insists the 220 trucks contain humanitarian aid, but Kiev fears they may deliver arms, fuel and other supplies to the rebels.