A time lapse video filmed of the Costa Concordia on Monday (July 14), shows how far the wreck has been towed from the coastline of Giglio island by salvage teams. Video: Reuters

Time lapse video captures the initial stages of the refloating of the Costa Concordia. Filmed from before dawn to approximately 0830gmt the video shows the cruise liner straightening as it begins to float. Video: Reuters

Underwater footage of the stricken cruise liner, whose capsize claimed the lives of 32 people, showed the submerged decks of the ship littered with objects including pillows, shoes and books. Video: Reuters 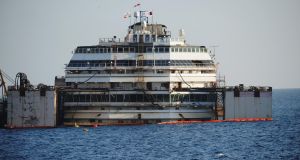 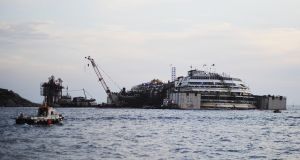 You could hardly say that she was up and running but the operation to refloat the sunken cruise liner, the Costa Concordia, finally got under way at about 6am this morning on the island of Giglio.

To the naked eye, there is as yet no sign of movement but the salvage team confirm that the lift has already begun with the “caissons” or metal boxes which helped to right her last September having been emptied of almost all their water.

These same caissons, also called sponsons, will now be filled with compressed air in order to lighten the stricken ship’s load and to help her rise some two metres in the water.

At the moment, the Concordia is resting on a purpose-built steel sea platform, so clearly this morning represents one of the most delicate moments in all this long and complex salvage operation since no one can be certain how the ship will react when it is required to “float” on its own two feet, so to speak.

Once it has been raised off the platform, tugs will pull the wreck some 30 metres eastward and out to sea in readiness to be towed off to Genoa for dismantling.

The operation began early this morning, not because the salvage team wanted to make an early start to the day but rather because 06.00 hours represented today’s low tide, obviously the best moment to attempt to move a “wreck” that remains two thirds under water.

If and when the operation goes well, then we will probably notice a difference by lunchtime today.

In the meantime, a small armada of tugs, motor boats, fire service boats and other craft carrying environmentalists and marine biologists are swarming around the wreck, ready to move if anything were to go wrong.

Clearly, the biggest worry facing the salvage team is that if the ship did begin to break up when moved, then it would spill a toxic cocktail of chemicals, fuel and ship’s debris into the sea and onto the beach, which is less than 50 metres away.

So far, the sea gods seem to be on the salvage team’s side. For the last few days, there had been concern that the refloat would have to be postponed because of the wet and windy conditions of this most unusual Italian summer. However, the skies are blue, or bluish with clouds here and there, and more importantly, there is no serious wind.

Whilst it is hoped to raise the ship by some two metres today, the entire refloat operation requires the boat to come up by 12 metres.

This is expected to take up to five or six days which means that the Concordia will be ready for the next phase, the tow into Genoa perhaps next Monday.

That towing operation, too, will be another delicate business with the ship travelling at the slow rate of two knots per hour and accompanied by its armada of tugs and support boats on a journey that will also take five to six days.

Obviously, too, the one thing that the salvage team do not need is for the wreck to encounter bad weather on its 240km trek north to Genoa.

When the ship has finally been dismantled in Genoa, the best estimates suggest that the total cost of the entire rescue and salvage operations over the last two and a half years will be in excess of €1.2 billion.

The ship’s captain, Francesco Schettino, is currently standing trial in Grossetto, charged with multiple manslaughter, having caused a shipwreck and having abandoned his stricken ship.

The ship was carrying 3,216 passengers and 1,013 crew on the night it ran aground after it had run into rocks close to Giglio.

The impact with the rocks, which caused a 70-foot long gash in the hull of the ship below the water line, allegedly happened after the captain had steered far too close to land in order to do an “inchino” or curtsey to the island.

In an interview last week, Mr Schettino argued that if the ship’s helmsman had not misunderstood his instructions, turning left when he had ordered him to turn right, then the collision with the rocks would not have happened. An initial judgement in the Schettino trial is expected some time in the next year.

Even when the captain’s trial has finished, however, the legal wranglings over the Costa Concordia disaster are set to continue with many of the passengers have taken class actions against the British-American cruise giant, Carnival Cruise, owners of the Costa Cruise company which ran the Costa Concordia.