Coming home: how jihadis get from Syria to Europe 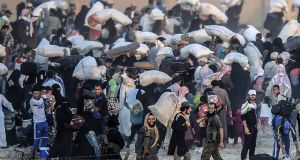 Islamic State members ask people to go back to the city centre at the Turkish Akcakale crossing gate in Sanliurfa province in June. Turkey has said it was taking measures to limit the flow of Syrian refugees on to its territory. Photograph: Bulent Kilic/AFP/Getty Images

The names of European jihadis who have used Turkey to return to Europe evoke some of the worst tragedies to visit the continent in recent years. The wife of a Charlie Hebdo killer, Hayat Boumeddiene, passed from Syria into Turkey last January. A suspected scout for the Paris attackers, Belgian Ahmet Dahmani, was detained at a hotel in the Turkish city of Antalya just days after the horrific attacks on November 13th.

Before Frenchman Mehdi Nemmouche killed three people at a Jewish museum in Brussels in May 2014, he entered Turkey from Islamic State-controlled Syria before attempting to cover his tracks by flying first to the Far East and then back to Frankfurt.

Rebels and jihadis leaving northern Syria are thought to do so through several main routes along the Turkish border. One such crossing is through the areas around the town of Akcakale.

Akcakale is a small, dusty Turkish border town just 100km from Raqqa, the declared capital of the Islamic State. In the fields to its east and west, now-infamous citizens of France, Germany and Britain – men, women and children – have run under the cover of darkness into Syria to begin new lives under Islamic State, also known as Isis.

Now, many are attempting to return to Europe; several times this year suspected Isis jihadis have been caught and detained while trying to re-enter Turkey.

Hundreds of kilometres to the west, a Syrian rebel who fought with the Farouk brigades and who asked to be identified only by his first name, Tareq, crossed into Turkey from Haram in northwest Syria last year with one other rebel fighter.

Although the al-Qaeda-linked Nusra Front controls the area, he saw no sign of jihadis attempting to enter Turkey illegally. “I had to wait all day until nightfall and when we got into Turkey, we were caught and beaten by the Turkish border guards,” he says from Istanbul.

Although the Farouk Brigades are not considered a terrorist group and have fought Isis, the fact that combatants have been allowed entry to Turkey suggests fighters from extremist elements may also have entered without much difficulty.

Turkey has arrested more than 100 foreign nationals suspected to be members of Isis in addition to blacklisting more than 26,000 foreigners since declaring the organisation a terrorist group in 2013, although few have been caught while attempting to reach Europe.

Among the noted extremists detained by Turkey include Briton Aine Lesley Davis, one of a group of Islamic State jihadis including Mohammed Emwazi or “Jihadi John”, who held groups of kidnapped foreigners before their beheading. Davis was detained at a suburb west of Istanbul a day after the Paris attacks last month. Another is Mourad Fares, a known criminal who recruited young people in Toulouse and Strasbourg to join Isis in Syria. Fares was arrested in Istanbul in August 2014 and deported to France.

Intelligence co-operation between Turkey and European authorities,however, has been patchy. Last year, French security officials waited at the wrong airport for three extremist suspects detained and deported by Turkey.

The suspects were flown to an airport in the south of France where they disembarked alone before later turning themselves in at a local police station.

Although the number of foreign fighters in Syria today has rocketed to about 31,000, Turkey says it cannot deny foreign suspects entry from Europe without prior notice from their governments or from internal policing agencies.

Now, because extremists can be identified and detained at Turkish airports and Turkey-EU border crossings, many are thought to have joined the hundreds of thousands of refugees crossing the Aegean Sea to Greece. Two people thought to have taken this route, to devastating effect, blew themselves up outside the Stade de France in Paris on November 13th.

A senior Turkish official, who requested anonymity, said to the best of his knowledge no suspected extremists had been caught trying to enter Greece by boat. “The case of Paris attacker Omar Ismail Mostefai, about whom we warned the French authorities twice, is a great example of how effective the Turkish authorities have been,” he said. Information on Mostefai, one of the attackers at the Bataclan where 90 people were killed, was not sought by France from Turkey until after the attacks.

“If a European terror suspect is caught in Turkey, we promptly inform their embassy and start the deportation process,” the official added.

Authorities said the Turkish coast guard had been given no specific orders or guidelines to detain suspected jihadis attempting to cross into Greece.

“The coast guard, however, follows a standard procedure – they patrol the Aegean Sea 24/7 to intercept refugee boats and bring everyone on board back to the mainland,” said the official. “Once there, security officials and expert profilers identify terror suspects.”

1 Covid-19 incidence in the Republic set to surpass that of UK
2 Coronavirus: Non-essential travel from US set to be banned within days
3 ‘Our hearts are broken’ – implications of fresh lockdown sink in
4 New call centre at Dublin Airport to track arriving passengers
5 German nudist chases wild boar that stole laptop at Berlin lake
Real news has value SUBSCRIBE