Beijing leadership in denial about scale of problems the country is facing, warns artist 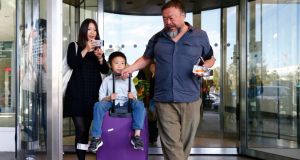 Chinese artist Ai Weiwei his son Ai Lao at Munich airport: the activist has said that his homeland must become a democratic society. Photograph: Matthias Schrader/AP

Chinese artist and activist Ai Weiwei has warned that his homeland will “explode” unless the communist regime allows managed transition to democracy.

In his first interview since he was allowed to leave his homeland, the regime-critical artist said the Beijing leadership was in denial about the scale of the problems the country is facing.

“It’s achieved a lot economically but it cannot suppress the longing for freedom,” he told Germany’s Süddeutsche Zeitung daily.

“At some point the pressure will get too big and everything will explode ... the big question is, how a modern Chinese society should be created. There isn’t even a debate.”

Last month Chinese authorities returned Mr Weiwei’s passport, four years after they revoked it during a tax evasion investigation during which he was imprisoned but never arrested nor charged.

The 57 year-old Chinese artist is currently in Germany, where his partner and son live, and where he has been offered a guest professorship at Berlin’s Fine Arts Academy.

Asked if he had agreed to any restrictions to allow him leave China, Mr Weiwei said there were “nearly none” but declined to elaborate. “They also promised I could come back, which was very important to me,” he said. “They said: you are a free person.”

He said he was still under surveillance by the Chinese authorities but said the atmosphere was “more open” than before. “You can talk a bit with them now,” he said, noting that no one had interfered in his last five exhibitions in China. “The state-run newspaper, the Global Times, even mentioned my name saying ‘Ai Weiwei is welcome when he doesn’t get involved in politics and starts making art for the people’,” he said.

Asked about the current situation in China, he said the ongoing corruption crackdown had caused “enormous tensions” but that it was necessary to “drain the swamp”.

He expressed understanding for his tough treatment at the hands of the state, saying Chinese leaders were worried about the collapse of social cohesion. But this fragility was the symptom of a deeper malaise in Chinese society, he said.

“There is no individuality, no freedom of speech, no personal autonomy, no societal structures like churches or unions where interested people could articulate themselves,” he said. “At the top is the emperor and, below, the faceless mass. It’s still that way.”

He said China’s problem was not the people managing the system – “they’re in no way stupid, there are a lot of people making a great effort. “The system is what’s wrong, that’s why it’s not progressing,” he said. “But I have to be careful. It’s easy to destroy something but what comes afterwards is not necessarily better.”

The artists indicated he is planning to spend some time in Europe in the next months. While Germany has granted him a four-year multiple-entry visa, he did not comment about any plans to travel to Britain for an upcoming exhibition. Last week, after an outcry by human rights groups, British authorities reversed a decision to grant him only a short-term visa.