Charlie Hebdo puts Muhammad cartoon on its next cover 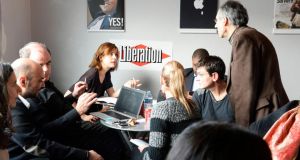 Employees from the satirical weekly Charlie Hebdo meet in the offices of the left-wing daily Libération in Paris. Two days after the attacks by terrorists on the weekly, the newspaper’s remaining staff members gathered to build the next issue while still in shock. Photograph: Bertrand Guay/Pool

French satirical weekly Charlie Hebdo is publishing a cartoon of the Prophet Muhammad on the cover of its first issue since Islamic extremists killed 12 people at its offices.

The newspaper Libération hosted Charlie Hebdo staff as they prepared the new issue and is handling its special million-copy print run in numerous languages.

Up to three million copies are believed to have been printed ahead of tomorrow’s publication date — well up from its usual run of 60,000.

The cartoon shows a bearded man in a white turban with a tear streaming down his cheek, and holding a sign reading “Je suis Charlie” (I am Charlie). Overhead was the phrase “Tout est Pardonné” (All is Forgiven), which French media interpreted as meaning Muhammad is forgiving the cartoonists for lampooning him.

Charlie Hebdo’s past caricatures of the Muslim prophet appear to have prompted last week’s attacks, part of the worst terrorist rampage in France in decades.

Some witnesses reported that the attackers at the paper’s offices shouted: “We have avenged the prophet.” Many Muslims believe all images of the prophet are blasphemous.

Three days of violence ended on Friday with a siege at a Jewish deli in Paris where four hostages and a gunman were killed. Shortly before that, police killed the Charlie Hebdo attackers in a separate gun battle at a print works northwest of the city.

In the wake of the violence, defence minister Jean-Yves Le Drian said 10,000 troops were being deployed at sensitive sites, such as mosques, synagogues and airports.

France’s Islamic council called on the government to step up protection of mosques, saying that 50 anti-Islamic acts had been reported since the attack on Charlie Hebdo.

European leaders are worried that the events in France last week will add to rising anti-immigrant sentiment in Europe.

On Monday, a record 25,000 anti-Islamist protesters marched through the eastern German city of Dresden, many holding banners with anti-immigrant slogans.

In light of the threat to France, Le Drian said the government would need to review some of its military capabilities. “One of the questions that will have to be raised is the role of the army reserves,” he said.

He also raised the prospect of reconsidering the severely strained military budget when its long-term spending plan comes up for review later this year in parliament.

The French government was due to seek parliament’s approval for France’s participation in air raids against Islamic State in Iraq. One of last week’s killers cited France’s military strikes against Muslims as a motivation for his acts.

Under French law, the president can launch foreign military action, but must seek parliament’s approval four months into an operation if it is to continue.

French police have said as many as six members of a terrorist cell involved in the attacks may still be at large.

France saw its biggest demonstrations in history on Sunday as millions turned out to show unity and defend freedom of expression.