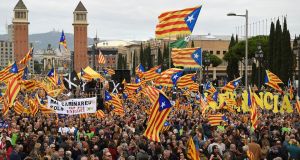 Catalonia has launched a bid to convince the EU of the merits of its plan to stage an independence referendum later this year, amid accusations by Spanish conservatives that the secessionist bid is politically in step with the European far right.

Catalan premier Carles Puigdemont gave a conference in the European Parliament building in Brussels on Tuesday evening, outlining his plans for a binding vote on independence from Spain in September. His deputy, Oriol Junqueras, and foreign minister, Raül Romeva, also took part, the three of them arguing that the project was economically, politically and democratically sound.

“2017 will be the year Catalonia decides its future via a referendum,” Mr Puigdemont told the 350-strong public, among whom were MEPs, parliament staff and journalists.

He added: “The celebration of the referendum is viable on a judicial level and the problem is simply a lack of political will.”

Mr Puigdemont’s plan faces the staunch opposition of the Spanish government, which sees the referendum and any steps towards independence as illegal. Polls show Catalans are evenly divided on the independence issue.

The Brussels event was the beginning of an international charm offensive by the Catalan government, which sees European recognition of its controversial independence roadmap as crucial if it is to succeed. The Catalan government flagged the conference by taking out large advertisements in several European newspapers.

So far, European leaders have mostly given the Catalan independence plan short shrift. In 2015, both German chancellor Angela Merkel and then-British prime minister David Cameron warned Catalonia that leaving Spain meant leaving the EU, suggesting it would face the laborious process of reapplying for membership as a separate state.

Puigdemont and other advocates of independence have insisted that Catalonia’s economic weight – it has a GDP of around €200 billion – and status as a tourist and trade hub would ensure the EU fast-tracked its membership.

“Europe is a very dear idea to Catalans; we have always felt a part of it and we have seen it as a source of inspiration for our reality,” Mr Romeva told the conference.

“Catalans are European citizens and Europe cannot be built without taking into account its citizens.”

On Tuesday, Spanish prime minister Mariano Rajoy once again ruled out permitting the referendum, describing it is as the only issue with regard to Catalonia that was not negotiable. He added that the Catalan separatists “would do much better if they looked for that outstretched hand instead of continuing to embrace radicalism and being handcuffed by extremism.”

The Catalan government’s Junts pel Sí coalition is led by Mr Puigdemont’s conservative nationalists and Mr Junqueras’s centre-left republicans. They are able to govern thanks to the support of the anti-capitalist Popular Unity Candidacy (CUP).

While the Catalan delegation sought to convince the international community of their region’s importance to the EU, Esteban González Pons, an MEP of Mr Rajoy’s Popular Party (PP), presented a much less harmonious view of the independence movement. In a letter to European People’s Party (EPP) colleagues, he urged them not to attend the Catalan conference in Brussels on the grounds that it was an unofficial event advocating an illegal breakaway.

In a radio interview, he also made unflattering comparisons between the independence movement and right-wing populism.

“We’re seeing more and more sympathy from the extreme right for this movement of Puigdemont and his friends from Junts pel Sí,” González Pons told the Ondacero radio station.

“The pro-Brexit extreme right – French pro-Brexit and Dutch pro-Brexit camps – see as perfectly acceptable and even desirable a Catalan version of Brexit,” he added. “In the end, the America for Americans rhetoric, or that of the British or Dutch first, is identical to the Catalonia for Catalans of Puigdemont.”

Directly contradicting Mr Puigdemont’s expressed position, the MEP added that in Brussels, “what is understood is that Catalonia wants to leave Spain, leave the EU and leave the single market.”

The PP’s Andrea Levy made similar comments, warning that Mr Puigdemont was in “a parallel process” to the French National Front and the UK’s exit from the EU.