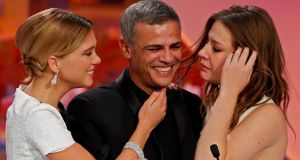 
The Cannes Film Festival came to a close last night with the presentation of the Palme d’Or, awarded for best film in competition, to Abdellatif Kechiche’s devastating three-hour drama Blue is the Warmest Colour . The Franco-Tunsian’s sexually explicit film, detailing a passionate romance between two young French women, received ecstatic reviews after its screening on Wednesday and was installed as a firm favourite.

Adèle Exarchopoulos and Lea Seydoux, the film’s stars, gave easily the best performances of the festival, but arcane rules preclude the awarding of acting prizes to performers from the Palme d’Or winner.


Sudden twist
The best actress award ended up going to Bérénice Bejo for her strong turn as a woman facing up to divorce in Asghar Farhadi’s The Past . In an unusual twist, however, an honorary Palme d’Or was handed to Exarchopoulos and Seydoux. Few would argue with the break from convention.

The Grand Prix, essentially the runner-up gong, went the way of the Coen Brothers’ delightful, sombrely hilarious Inside Llewyn Davis . The American directors’ film, detailing a folk singer’s failure to succeed in Bohemian Greenwich Village during the early 1960s, was also a big hit with critics when it screened last weekend. They won the Palme d’Or for Barton Fink back in 1991.

If there was a surprise in the prizes, awarded by a jury headed by Steven Spielberg, it was the total shutout for Paolo Sorrentino’s The Great Beauty , a lavish study of decadence in modern Rome that inspired comparisons with Federico’s Fellini’s La Dolce Vita . Michael Douglas looked a solid contender for his turn as Liberace in Steven Soderbergh’s Behind the Candelabra , but Dern, a much admired actor, always looked like a very strong second favourite.


Jewels and pistol
The festival attracted a fair share of ancillary chatter this year with a jewel heist and a minor shooting adding colour. Gems worth somewhere in the region of $1 million were stolen from a safe in a luxury hotel on the opening Thursday. Two days later, a starting pistol was discharged in the direction of actors (and Cannes jurors) Daniel Autueil and Christoph Waltz. There was also much comment about the torrential rain that came and went throughout the 12 days.

The competition films were adjudged to be of a higher than usual standard. Attention will now focus on whether Kechiche will be able to release his film in the cut shown during the festival. Blue is the Warmest Colour , based on a graphic novel by Julie Maroh, features a number of very lengthy, very explicit sex scenes between Exarchopoulos and Seydoux.