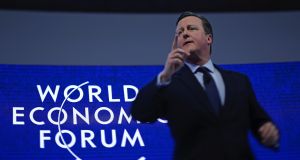 British prime minister David Cameron has increased pressure on his European counterparts to come up with a deal to keep Britain in the EU as he warned he was prepared to defer agreement on a package until after February.

Speaking at the World Economic Forum in Davos, the British leader said he was in no rush to secure a deal.

“I’m not in a hurry. I can hold my referendum at any time before the end of 2017. It is much more important to get this right, rather than rush it,” the prime minister said.

His comments are likely to unnerve negotiators in Brussels who are pushing for a deal at next month’s EU summit. Member states across the bloc are keen to secure agreement on the British question by February as the EU battles with a range of other crises including the refugee crisis and threats to the Schengen free travel area.

European Council president Donald Tusk and his officials are working on a detailed legal document that they expect to present to officials from the EU’s remaining 27 member states at meetings provisionally scheduled for February 5th and February 12th in Brussels.

In an indication that the February deadline may be slipping, French prime minister Manuel Valls said yesterday that the February summit may only be a “decisive step forward” rather than a completion of the negotiations.

Speaking at the forum, Taoiseach Enda Kenny said it would be “helpful” if the British negotiations could be concluded in February, warning that the EU would be weaker without Britain.

“Ireland supports very strongly that Britain remains a central player in the EU,” he said.

It follows Minister for European Affairs Dara Murphy’s assertion earlier this week that Ireland would not support Britain staying in the EU “at any cost.”

While Mr Kenny briefly met Mr Cameron in Davos yesterday, he travels to London for formal talks with the British prime minister in Downing Street on Monday.

Among the key issues to be resolved in the British renegotiation is the question of in-work benefits for migrants, an issue that could potentially have implications for Irish nationals living in Britain.

Mr Cameron said yesterday that the issue of migrant benefits was “absolutely crucial” to the negotiations. “We do need action on this front.”

Meanwhile, speaking during a panel debate with Mr Kenny yesterday, Nobel Prize-winning economist Joseph Stiglitz said Ireland’s economy would have fared better if it had been permitted by the European Central Bank to burn private debt holders.

While he commended Ireland’s economic recovery, Mr Stiglitz said “every downturn eventually comes to an end”.

“The real question in judging it is how long is the downturn, how deep, how many broken bones in the process,” he said.