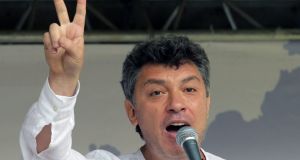 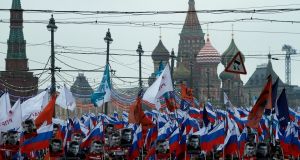 On the bridge in Moscow where Boris Nemtsov was assassinated aone year ago, a group of volunteers holds a constant vigil guarding both the memory of the slain Russian opposition leader and also the safety of the floral tributes that even in the depths of winter people have continued to bring.

Moscow City Hall has given permission for a memorial march on Saturday for Nemtsov (55), who was shot dead on the night of February 27th as he was walking home across Bolshoy Moskvoretsky bridge in full view of the Kremlin.

But if the crowd sticks to the officially approved route, the procession won’t pass by the scene of Russia’s highest-profile political killing in more than a decade.

“The authorities are afraid of anyone who thinks differently,” according to Pavel Takmakov, one of the unpaid volunteers who keep watch on the bridge. “They want all this forgotten,” he said, gesturing at the makeshift memorial to Nemtsov. “Then the whole matter can be closed.”

Police are holding five Chechen men accused of killing Nemtsov for cash. But the question of who ordered the crime remains unresolved.

Russian opposition leaders suspect that Ramzan Kadyrov, the strongman president of Chechnya and a protégée of Russia’s president Vladimir Putin, was behind the murder of their ally.

Kadyrov, who has lambasted Putin’s opponents as “jackals” and “traitors”, has denied involvement in the case.

Four days before the anniversary of Nemtsov’s death, Ilya Yashin, the deputy chairman of the Parnas opposition party, released a report detailing widespread corruption, rights abuse, kidnapping and torture in Chechnya and describing Kadyrov as a “threat to national security”.

Presenting the 65-page document to reporters in Moscow, Yashin called for the Chechen leader to be questioned in connection with a number of allegedly political killings including the murder of Nemtsov.

“People who criticise Ramzan Kadyrov and whom the Chechen president calls his enemies systematically get killed.”

Although security appeared tight at the launch of the report, some protestors managed to gain entry. One showered Yashin with fake dollar bills, a reference to Kremlin allegations that the US funds Russia’s liberal opposition. Then police ordered the evacuation of the premises, citing a bomb threat.

In the fraught aftermath of Nemtsov’s murder, Putin has been criticised for creating an atmosphere of anger and intolerance in Russia that had fired hostility to the opposition or anyone critical of Kremlin policies.

Several liberal political activists and commentators have fled Russia in the past year, including Nemtsov’s daughter Zhanna Nemtsov.

Volunteers guarding the makeshift Nemtsov memorial are not affiliated to a particular political party, but for security reasons they communicate via a private page on Facebook accessible only to invitees.

On several occasions pro-Kremlin nationalist groups lambasting Nemtsov as a “traitor” have attempted to destroy the makeshift memorial, Takmakov said.

But every time there is a disruption, supporters of Nemtsov return bringing flowers, candles and other tributes such as the red toy truck recently donated by Russian long distance lorry drivers who are staging a nationwide protest against a new road tax.

There are also foreign visitors such as Vygaudas Ušackas, the EU’s ambassador to Russia, who will lead a group of 28 other European diplomats to the bridge on Sunday to lay flowers at the place where Nemtsov was killed.

For the volunteers the immediate goal is to persuade the authorities to install a permanent plaque commemorating Nemtsov. “The dream is to have this place renamed Nemtsov Bridge,”said Takmakov.

But as deputies in the Russian parliament voted overwhelmingly against holding a minute of silence to honour Nemtsov yesterday, that prospect seems a long way off.