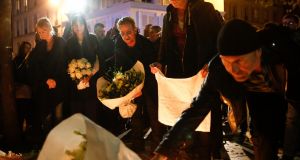 U2 lay flowers at an impromptu memorial near the Bataclan concert hall, where at least 89 people were killed the previous night, in Paris, France on Saturday, November 14th, 2015. Photograph: Simon Dawson/Bloomberg

The Paris terrorist attacks are “the first direct attack” on music, U2 lead singer, Bono has declared, as the top international band has cancelled shows in the city this weekend.

“Our first thoughts at this point are with the Eagles of Death Metal fans,” Bono told 2FM’s Dave Fanning Show, following the attacks that have so far claimed 129 lives.

Condemning the attacks by so-called Islamic State terrorists, he went on: “This really is the first direct hit on music we’ve had in this so called war on terror. We know that they don’t like music.

“This and the cold-blooded aspect of last night attacks are what are really upsetting because it means it could have been any of us,” he continued.

U2 laid flowers at a memorial near the scene of the Bataclan massacre on Saturday evening.

In a statement claiming responsibility, the Islamic State terrorist group said it had targetted the Bataclan theatre - where they deliberately fired upon wheelchair-bound concert-goers - because they were “idolaters gathered together in a party of perversity”.

The band’s crew have been in the city for the last week preparing for two shows before 30,000 people that were to be shown live on US television.

However, the concerts were cancelled - just two of dozens of events in the city that have been called off as Paris tries to come to terms with last night’s horrific attacks.

Insisting that Islamic State does not represent Muslims, the Irish singer said: “These people have robbed their own religion and run off with their own version that has nothing to do with Islam.”

Extremism is “an illness in the world now”, he went on: “They don’t like music, we know that. But I think music is very important and has a role to play in showing these people we wouldn’t allow them to stop us living our lives how we want.”

U2 was the first major international act to play in New York after the 9/11 attacks in 2001: “The feeling (then) was the same - this isn’t going to change us and nothing you do is going to turn us around in how we live our lives.

“We can’t wait to get back to Paris because we’re hearing from our fans there that these people will not set their lives, their agendas,” he declared.

Billy Bragg said the events in Paris last night are made all the more shocking by the fact that the killers deliberately targeted people who were socialising on a Friday night.

The language of the communiqué issued by Isis, seeking to portray those at the Bataclan concert as “idolaters” attending “a party of perversity” gives us a chilling insight into the mind of these killers, he said.

“This was an abhorrent attack on anyone who goes to a bar, or to a restaurant, to a gig or to a game. The fundamentalists would kill us all for enjoying ourselves. ISIS is a death cult and we who believe in life must go on enjoying ourselves in defiance of their provocations.”