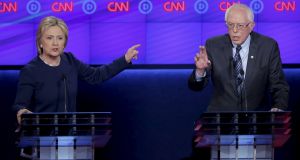 Bernie Sanders, the Vermont senator chasing Hillary Clinton for the Democratic nomination, faces a big test in Michigan today when the state votes in the third day of multistate contests in the US presidential race.

Sanders, the democratic socialist whose upstart campaign has given the presumptive nominee an unexpected run for her money, must show he can beat Clinton in a more ethnically diverse state such as Michigan where African Americans make up 15 per cent of the population.

The 74-year-old senator appeared flat-footed when he responded angrily to Clinton’s charge during the debate that he had voted against Obama’s rescue of the motor industry. Sanders actually voted for a package for the industry in December 2008 but against a larger $700 million (€635 million) bailout in January 2009 that was mostly used to prop up Wall Street.

Clinton scored a big hit when Sanders failed to explain this well.

“Well, if you are talking about the Wall Street bailout, where some of your friends destroyed this economy,” Sanders shot back.

When Clinton tried to interrupt him, Sanders cut off her with: “Excuse me, I’m talking,” drawing gasps from the audience.

“Let me tell my story. You tell yours,” he responded.

The senator came across as condescending and hectoring at times, bristling in his responses to Clinton: “Let me finish, please!” and “Could I finish? You’ll have your turn, all right?”

Amid clashes on gun control, trade deals and race relations, Sanders showed a crudely simplistic view when asked about his racial blind spots, clumsily implying that there were no poor whites and only poor blacks.

“You don’t know what it’s like to be hassled when you walk down the street or you get dragged out of a car.”

Sanders enters the Michigan primary with three victories – Kansas, Nebraska and Maine on Sunday – in the last four states but Clinton still has a far superior delegate tally. She has 1,147 delegates, including 471 superdelegate party leaders and elected officials, to Sanders’s 498. (Some 2,383 are required to win.)

The Vermont socialist has pledged to fight all the way to the Democratic National Convention in July but he needs to win Michigan if he has any hope of keeping pace with Clinton.

Democrats and Republicans also vote in Mississippi today, while Republicans in Hawaii and Idaho go to the primary polls too.