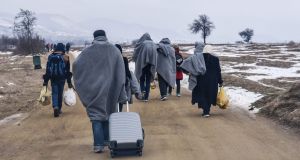 Migrants and refugees walk after crossing the Macedonian border into Serbia. A Belgian mayor has proposed banning male refugees from a swimming pool for a month after complaints from female bathers. Photograph: Armed Nimani/AFP/Getty Images.

A Belgian mayor has proposed banning male refugees from a swimming pool for a month after complaints from female bathers.

The idea from Marc Vanden Bussche, mayor of the coastal town of Kokzijde, earned a swift rebuke from the country’s migration minister who said it would be ill-advised.

The proposal shows continuing tension over immigration in Europe, which has heightened since authorities in neighbouring Germany accused gangs of migrants of sexually assaulting women in Cologne on New Year’s Eve.

“We had women complain because they felt stared at and selfies had been taken with them. It’s escalating. We never had any complaints before,” said Mr Vanden Bussche said.

Mr Vanden Bussche said he had decided to act after police were called in to investigate an Iraqi man who had caught an 11-year-old girl as she came off a slide.

The politician from the Dutch-speaking liberal party Open VLD, said he would propose a one-month ban at a council meeting on Monday to allow tempers to cool. The town recently took in 300 asylum seekers.

“In the meantime we will teach them about our way of life and explain the rules of the pool to them,” he said, adding the ban would not affect children and their mothers.

“It’s never wise to punish a whole group for the transgressions of a few,” he said in a tweet. “Asylum seekers live in open centres, they’re free to go swimming. But hands off!”

The German town of Bornheim, 30 km south of Cologne, temporarily banned male asylum seekers from its pool this month after receiving complaints of sexual harassment.

More than 600 women in Cologne and other cities filed complaints ranging from sexual molestation to theft in attacks on the New Year’s weekend. Police have said their investigations are focused on illegal migrants from North Africa and asylum-seekers.