Republic is taking active role in war commemorations across Belgium 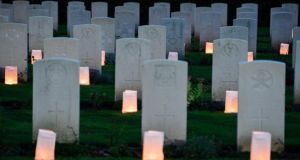 Candles placed in front of the graves during a first World War centenary commemoration in Ploegsteert, Belgium, on October 17th . Events commemorating the war are continuing in Belgium and further afield. Photograph: Stephanie Lecocq/EPA

Last Friday evening, quietness descended over a corner of northern Europe as Belgium paused to remember the 600,000 victims of the first World War who died on Belgian soil.

From Nieuwpoort on the North Sea to the town of Ploegsteert, 50km south on the French border, 8,400 torchbearers lined up to honour those who fell between 1914 and 1918.

The “front of light” illuminated the arc of the western front, the line between allied and German powers which, though no longer visible, is etched into the Flanders landscape like a scar.

Though the position of the front shifted periodically during the four-year war, reflecting the advances made by each side, it was the relative stagnancy of the western front that was one of the great tragedies of the war, as it became a battle of attrition rather than conquest.

The approach of the traditional armistice date of November 11th in a few weeks’ time is likely to bring the issue of commemoration back into focus.

The Republic will be taking an active role in the commemorations, as the country continues its engagement with a chapter of history that had long been hidden.

Perhaps of most significance will be the participation of Ireland’s Ambassador to Britain, Daniel Mulhall, in the annual wreath-laying ceremony at the cenotaph in London for the first time this year.

’s involvement in the war.

Tonight, the Irish embassy in Belgium is hosting broadcaster Gay Byrne at a sold-out event in central Brussels. Byrne is expected to reflect on his experience of retrieving the hidden history of his father’s participation in the first World War, ahead of a screening of the RTÉ documentary broadcast earlier this year, My Father’s War.

Ireland was also represented at Friday’s Festival of Light event in Belgium, by politicians from north and south of the Border.

The Irish delegation, which was represented by Frank Feighan TD, chairman of the British-Irish Parliamentary Assembly, and Gerry Mulligan, head of the Northern Irish Assembly in Brussels, participated in the event at Heuvelland – one of nine “stopping points” chosen by the Flemish authorities along the route.

Home to the “pool of peace”, Heuvelland is located near the site of the Island of Ireland Peace Park in Messines, which honours the men from both communities who fought and died together in the war, many of them having fought side by side in the battle of Messines ridge in 1917.

In a moving ceremony, both men lit a claddagh symbol that was pushed gently into the pool of peace, a symbol of friendship and reconciliation.

This week the British-Irish Parliamentary Assembly also used the occasion of its 49th annual meeting as a chance to visit the battlefields of Flanders. The assembly met in the town of Ashford in southeast England, travelling to Belgium on Monday by Eurostar to honour the victims of the war.

The group visited battle sites and memorials across the region, including the grave of Willie Redmond, the Scottish memorial at Frezenberg and the Welsh memorial at Langemark, before participating in the last post ceremony in Ypres.

The event will begin in Nieuwpoort, the coastal town 35km north of Ypres, to mark the flooding of the Yser plain, a key event in the early months of the war. In October 1914, the German advance from the east was halted when the locks at Nieuwpoort were deliberately opened, causing the water level between the river Yser and the railway embankment to rise.

The commemoration will finish with a ceremony at Ypres, with a speech by the new Belgian prime minister, Charles Michel, and a wreath-laying ceremony.

As the four-year period of commemorative events to mark the first World War continues, Tuesday’s event will offer another opportunity to quietly reflect on the events that ravaged a continent 100 years ago.