Assuring France that Muslims feel responsible but not guilty 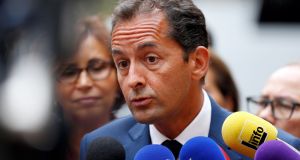 Political advisor, business consultant and intellectual Hakim El Karoui: In July, he drafted an open letter published by the Journal du Dimanche. “We who are French and Muslim are ready to assume our responsibilities,” it began. The text was signed by 41 Muslim academics, business people, scientists and cultural figures, and was widely noted by media and politicians. Photograph: Matthieu alexandre/AFP/Getty Images

Hakim El Karoui was not predisposed to become a spokesman for the silent majority of French Muslims. “I never played the role of the minority kid from the kasbah,” he says over lunch in Paris. “What interested me was France, Europe, the Mediterranean.”

At the same time, El Karoui built a reputation as a public intellectual. Twelve years ago, he founded the 21st Century Club, most of whose 300 members are of Arab, African and Asian origin. Four have become cabinet ministers.

Each year, members of the 21st Century Club tell close to 10,000 underprivileged youths how they succeeded in their chosen fields. “We are showing that success exists, both to immigrant youths and to the rest of society and the French elite,” El Karoui explains.

In keeping with French laïcité (state-enforced secularism), El Karoui rejects ethnic or religious distinctions. Has he ever encountered discrimination because of his Arab name? I ask. “But Hakim is a French name” he insists. “And Islam is a French religion. That’s the point.”

The jihadist attacks of the last two years have altered El Karoui’s approach. In July, he drafted an open letter published by the Journal du Dimanche. “We who are French and Muslim are ready to assume our responsibilities,” it began. The text was signed by 41 Muslim academics, business people, scientists and cultural figures, and was widely noted by media and politicians.

It is not a good time to be a Muslim in France. The extreme right and jihadists are hankering for civil war, El Karoui says. “There’s a dangerous convergence between populists and jihadists, with Muslims caught in the middle. I’m committed to trying to prevent that.”

He most fears an attack on a mosque. “The riots of 2005 started that way, with a tear gas grenade in the Omar Mosque [in a suburb north of Paris]. The riots would not have spread through the country if that hadn’t happened,” El Karoui says. An attack by the extreme right or jihadists, or a police blunder, could precipitate more violent conflict.

El Karoui is about to publish an in-depth study of Muslims in France for the Institut Montaigne. “The 2005 riots had no leaders, slogans or demands,” he says. “Today, there is an ideology . . . This is a revolt.”

While the attacks continue, it is virtually impossible to improve the image of Muslims. “With every attack, we lose ground,” El Karoui says with a sigh.

The Front National (FN) has softened its discourse against Muslim immigrants to “We told you so”. The authoritarian drift in French politics is most marked in programme of the former president and presidential candidate Nicolas Sarkozy, who is attempting to seduce FN voters.

Sarkozy’s “we’re at war” justification could spell the end of the rule of law, El Karoui warns. After 9/11, that led the US to Abu Ghraib and Guantanamo, water-boarding and extra-judiciary renditions. It destroyed the Middle East.

“If one abandons the rule of law, there are not 50 shades of grey,” El Karoui says. Sarkozy demands the presumption of innocence for himself in financial scandals, but wants to imprison some 15,000 suspected Islamists on the mere presumption of guilt.

“Once you lock them up, you need information. So why not torture them?” El Karoui says. “Why not punish their families, the way the Israelis do? Once a state does these things, it is no longer itself.”

“If we had cited all the victims except the Jews, it would have been scandalous,” El Karoui says. “But we mentioned at most a third of the victims. We started with the Charlie Hebdo attack, and we mentioned the most recent victims. We didn’t mention Brussels, the Stade de France, or the three soldiers killed by Merah because they were Muslims.

“The error was to forget we were speaking as Muslims,” El Karoui continues. “As a Muslim, one is always suspected of anti-Semitism until the contrary is proven. Whatever you do, whoever you are, you’re perceived as a Muslim, so you are guilty. That’s why we had to act. We cannot remain in a situation where 6 to 7 per cent of the French population is deemed guilty not only of anti-Semitism but of attacks against France.”

The accusations were all the more unfair because El Karoui is treasurer of the Aladdin Project, launched by the Foundation for the Memory of the Shoah, to tell Arabs the story of the Holocaust. “I believe that one should respond to stupidity with intelligence and knowledge,” he says. “Anti-Semitism is a blockage in the Arab world.”

El Karoui calls on Arabs and Muslims to assume their responsibilities. “It’s not because of Israel that the Arab world is economically backward and politically divided,” he says. “It’s because of the Arabs. People are responsible for what happens to them. That’s also the case of Muslims in France. Their difficulties are not solely the result of xenophobia, racism and colonialism.”

El Karoui wants a Muslim reformation, in which theologians would put Koranic scripture in historical context, and discredit jihadists who cherry-pick incitements to violence. “Nothing in the texts prevents us adopting Western social values,” he says. “Obviously, there is violence in all religious texts. There is also love, in more or less the same proportion . . . We have to promote intelligence over stupidity.”

Goverment response – Ill-received appointment In response to the appeal by Hakim El Karoui and 40 other leading French Muslims, the government revived the dormant Foundation for the Islam of France.

But the appointment of Jean-Pierre Chevènement (77) to head the foundation was ill-received.

“Chevènement is an honourable, respectable man, but it’s a humiliation,” says El Karoui. “Is there not a single Muslim in France capable of creating a bridge between the Republic and Islam? It signifies that Muslims are children . . . They went looking for [Marshal] Lyautey [who ruled Morocco].”

The fact that Chevènement is a former interior minister conveyed the idea the head of the foundation had to have the police behind him, El Karoui says. “It was an error.”

Chevènement’s exhortation to French Muslims to “exercise discretion” offended many.

Other government appointees to the foundation are hardly more likely to connect with rebellious Muslim youths. They include 71-year-old writer Tahar Ben Jelloun and the rector of the Paris mosque, Dalil Boubakeur (75).

El Karoui believes the choice of leaders doomed the project to failure. “We will have to organise without the state,” he says. He wants to enlist up to 1,000 moderate, successful French Muslims to lead the “cultural battle” against jihadist ideology.