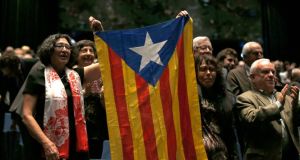 Supporters hold up a Catalan independence flag during a conference in Barcelona on Tuesday called after a symbolic vote on the region’s independence from Spain. Photograph: Gustau Nacarino/Reuters

The leader of the Catalan region, Artur Mas, is trying to persuade fellow pro-independence parties to back a plan to hold a plebiscite-style election as a step towards formalising secession from Spain in 2016.

The main novelty of the plan was the timeframe. If the secessionist ticket achieved a convincing win, within 18 months there would be another vote to formalise creation of an independent Catalan state, he said.

His preferred route to independence is via a Scotland-style referendum, agreed on with the central government. However, Madrid has ruled out supporting such a project.

Mr Mas’s main challenge is to convince other parties to join him in the plebiscite venture. The recent unofficial referendum was a huge boost for Mr Mas, who until then had appeared to be overshadowed by more radical pro-independence groups. His ability to bring more than two million Catalans out to vote, despite Spanish government attempts to thwart the ballot via the justice system, was seen as a major coup.

However, despite his resurgence, the other pro-independence parties in the Catalan parliament lean to the left of Mr Mas’s conservative Convergence on social issues, making them unnatural allies on an electoral ticket. Perhaps more importantly, his party has been tainted by revelations that its former leader, Jordi Pujol, hid millions of euros in tax havens for decades.

Two parties that supported his November 9th referendum, the ICV greens and the leftist-separatist CUP, have already backed away from this scheme. More important to him will be the support of the stridently pro-independence Catalan Republican Left (ERC), which has surged past Mr Mas’s own party in recent polls.

At Tuesday’s presentation of the Mas road map, ERC leader Oriol Junqueras caused a stir by refusing to applaud at its conclusion. However, yesterday he was marginally less frosty, declaring that the priority “is to seek the formula that allows us to gather not a little, but a lot [of support]”.

The debate over how best to move towards independence has been taking place ahead of a visit to Catalonia by Spanish prime minister Mariano Rajoy on Saturday, when he is due to make a speech that could offers clues as to how he will approach the Catalan crisis in the coming months.