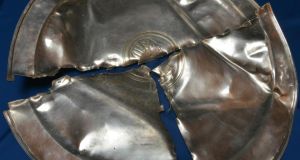 A chopped-up silver plate from late antiquity, a part of a ‘Barbarian Treasure’ illegally excavated in the Palatinate. According to archaeologists, an investigation has been started against the people who found the treasure in a forest near Ruelzheim as the place where the treasure was found has been destroyed. Photograph: EPA

A hobby archaeologist with a metal detector has discovered a trove of gold and silver in a German forest dating back to late Roman times, fuelling speculation it could be the legendary Nibelung treasure that inspired Richard Wagner’s opera cycle.

The haul from the western state of Rhineland Palatinate, worth about €1 million, includes silver bowls, brooches and other jewellery from ceremonial robes and small statues that adorned a grand chair, said archaeologists.

“In terms of timing and geography, the find fits in with the epoch of the Nibelung legend,” Axel von Berg, the state’s chief archaeologist was quoted by German media as saying.

“But we cannot say whether it actually belongs to the Nibelung treasure,” he said, adding that whoever owned it had “lived well” and could have been a prince.


Suspicions
The haul, which was found near Ruelzheim in the southern part of the state, is now at the state cultural department in Mainz, but officials suspect they may not have all of it. Prosecutors have begun an inquiry into the man who found the treasure because they suspect he may have sold some of it, possibly to a buyer abroad, the department said. “The spot where the find was made was completely destroyed by the improper course of action.”

Whether the treasure is the famous “Rhinegold” or not, it seems to have been buried in haste by its owner or by robbers in about AD 406-407, when the Roman Empire was crumbling in the area along the Rhine, von Berg said.

According to Nibelung legend, the warrior Hagen killed Siegfried and sank his treasure in the Rhine. It has shifted its course many times over the centuries, so the treasure need no longer be under water. – (Reuters)