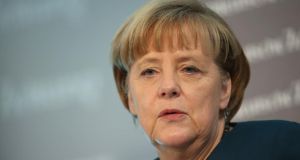 Chancellor Merkel has urged EU member states to drive on European integration and not rest on their post-crisis laurels. In a far-ranging European speech yesterday, the German leader called for closer economic and financial union while conceding that Berlin was a poor example on this front in the recent past.

Dr Merkel vowed this would not happen again on her watch – neither in Germany nor anywhere else in the EU – and warned leaders not to view tough new fiscal rules agreed during the crisis as being open to “creative interpretation” in two years’ time.

“It’s often the case that the person in Europe who draws attention to the rules is viewed as a penny-pincher, a pedant or someone who lacks emotional enthusiasm for Europe,” she said. “But Europe’s problem . . . is that we have promised pretty much everything but kept few of those promises. That has to change.”

Policing the rules had proven a major European problem in the past, she said, recalling how Germany watered down the stability and growth pact a decade ago when it found itself on the wrong side of EU debt rules.

Such flouting of EU rules had been a contributory factory in the euro crisis, she said. Battling the crisis and its effects had, she agreed, triggered a shift in how the EU does its business. Crisis-fighting measures were decided less by the traditional “community method” – where policy is driven and policed by the European Commission – and more by agreement among member states, such as the case of the fiscal treaty.

Smaller member states such as Ireland have criticised this trend, fearing a growing dominance of larger states on EU policymaking at intergovernmental level without the corrective influence of the commission. Germany and other states have defended inter-governmental decisions as essential to expedite reform in areas where EU institutions have no competence.


Treaty change
Yesterday, Dr Merkel indicated that her incoming government is ready to return to the traditional EU way of doing business but that this would require treaty change – and thus a referendum in Ireland. “Germany is ready to develop the treaties still further. At the very least we have to be ready to improve the euro protocol of the Lisbon Treaty – which only applies to euro states – to allow an institutional co-operation via the so-called community method and not to only be active at intergovernmental level.”

To restore the relevance of the community method she proposed a “new co-operation” between the commission and member states. This would ensure policy recommendations are seen as the product of negotiation with member states.

“In this way we create a sense of ownership, a sense of responsibility is created among member states to implement necessary change,” she said. “That’s what I understand by economic co-ordination.” The timing of her call is interesting, ahead of today’s meeting of euro zone finance ministers in Brussels to review the national budgets of member states under the so-called “two pack” rules.

Another step to restoring external investor trust in the EU was the new banking union, allowing EU oversight of national banks with powers to restructure, recapitalise or wind up institutions. She urged EU leaders to allow the ECB to operate an independent regulator and conduct robust bank stress tests, free of the political interference that marred previous attempts.

“Politicians now have the opportunity to create a really credible regulator and I would like to contribute to the ECB retaining its good reputation in the financial markets so that it can help us all,” she said.


Coalition deal
Though she has yet to seal a coalition deal in Berlin, her remarks yesterday gave strong indications of where she wants to see the EU move in her third term. Most of Dr Merkel’s remarks boiled down to the same thing: the need to restore reliability in European decision-making. A prerequisite for this, she said, was member states learning to look beyond their narrow national interests and recognise that “solidarity and national responsibility are always two sides of the same coin”.

Just as European integration hadn’t concluded with the Lisbon Treaty, Dr Merkel said the banking union was not the end of the narrative either.

“At the start of economic and monetary union, [former European Commission president] Jacques Delors pointed out in a report that closer economic and political co-ordination of a common currency area is necessary,” she said. “That is what we are talking about now and it is a subject that is very close to my heart.”