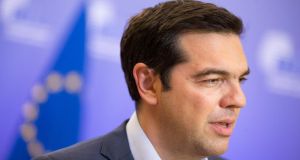 Greece PM Alexis Tsipras: Grexit will be off the agenda. Photograph: Bloomberg

Alexis Tsipras knows he cannot persuade his party to like a deal that repudiates some of the basic principles he and his colleagues stand for. Instead, as he struggles to stem the tide of defections before Wednesday’s key votes, he argues that to reject the deal would be to hand victory to Syriza’s enemies by allowing the right return to power.

If ousting Syriza is what the creditors hope the humiliating diktat will achieve, the prime minister’s allies argued on Tuesday, don’t let them win by splitting the party. “Wasn’t what happened in Brussels a coup?” said Nikos Filis, Syriza’s parliamentary spokesman. “The government came under threat from economic and political forces that do not forgive the Greek people for making a different choice,” he said, adding that the left could not be complicit in consigning Syriza’s period in power to a mere “left interregnum”.

Tsipras has told his party that he got the best deal he could. He found himself with very little leverage facing opponents who had lots. At the flick of a switch they could sink Greece’s economy. He had one alternative – bringing Greece out of the euro – but that could have been chaotic and he had no mandate for it anyway.

The prime minister now finds himself in the unenviable position, for any politician, of having to argue that he has made things less bad than they would otherwise have been. He points out that Grexit will be off the agenda, that debt restructuring is being openly talked about by European leaders, that he successfully resisted a German attempt to locate outside Greece the new investment fund that will manage up to €50 billion from the sale of public assets.

He also points out that Greece will now receive a bailout of €86 billion over three years in exchange for a package of tax rises and spending cuts that, only two weeks ago, the creditors were seeking merely to sanction a five-month lifeline of €7 billion.

It’s hardly the stuff of socialist dreams, and Tsipras knows it. Instead he must appeal to his colleagues’ pragmatism. All day on Tuesday, in the meeting rooms of the prime minister’s office and the corridors of Vouli, the Greek parliament, the party leadership was cajoling, persuading, counting heads. The party will be reassured by how reaction to the deal has played out in public.

While protesters have taken to the streets and Syriza has been denounced on the left, much of the public anger has been directed outwards, towards Germany and the European Union more broadly. As the most popular political leader in the country and the person voters most want to have as prime minister, according to recent opinion polls, Tsipras has built up considerable credit both within the party (which is somewhat less popular than he is) and among the public.

Out of a total 300 seats in parliament, Syriza has 149 and its coalition partner, Independent Greeks, has 13. The junior partner is wavering but most of its MPs will probably support the austerity package.

Within Syriza, however, Tsipras could lose anywhere between 15 and 50 MPs, by most estimates. The laws will probably still be passed because the three main opposition parties, New Democracy (76 seats), Potami (17) and Pasok (13) have said they’ll vote Yes.

But if Tsipras were to lose his own majority, his government would be destabilised and his authority diminished. He could stagger on for a few weeks, but not much longer than that.

Without a majority, the prime minister could opt to rely on opposition support for individuals votes or he could invite the opposition to form a government of national unity. Either way, an election would probably take place later this year. And, if opinion polls are any guide, Syriza would win.