World review of the year: The radical leader managed to secure backing for austerity 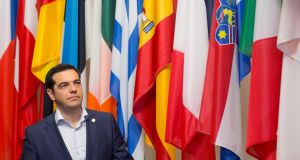 Alexis Tsipras: succeeded in maintaining his position as prime minister despite signing up to a vastly more punitive austerity programme than anything that had been envisaged at the beginning of the year. Photograph: Philippe Wojazer/Reuters

It was shortly before 9am on July 13th when bleary-eyed euro zone leaders emerged to face the waiting media.

Following a marathon 17-hour EU summit, a deal had finally been reached on a third rescue programme for Greece.

But it had not been achieved without a battle. Greek prime minister Alexis Tsipras was coming under severe pressure to sign up to a deal that his party and people had viscerally rejected.

Germany, pushed by finance minister Wolfgang Schäuble, was threatening Greece with ejection from the euro. Tsipras backed down and a deal was signed. But a Rubicon had been crossed. To many, the deal to prevent a “Grexit” marked one of the lowest points in the history of the European Union.

Few had predicted the turn of events a year ago. At the end of 2014, Greece was approaching the end of its second bailout programme and the promise of a return to private market funding.

Though most believed that some kind of precautionary credit line or temporary loan package would be necessary when the country’s second bailout expired, the economic picture was brightening, with 1.7 per cent growth recorded for the third quarter of the year.

But while Greece was approaching the finishing line, the cumulative effect of years of austerity was pushing the country to its limits. Prime minister Antonis Samaras was finding it increasingly difficult to bring his parliament with him as he continued to push through the last raft of austerity measures.

In December, Samaras took a political gamble by calling an early presidential election in an attempt to restore political stability, but the failure of his candidate, Stavros Dimas, to win a majority triggered snap elections.

On January 25th, left-wing party Syriza secured a clear victory, with more than a third of the vote. The significance of the victory went far beyond Greece, as Tsipras became the first European far-left leader to be elected since the onset of the financial crisis.

At first relations between the new government in Athens and its creditors were cordial. Finance ministers spoke of working constructively with the new regime and respecting the will of the Greek people.

Throughout the deepening crisis, the European Central Bank played a key background role. With deposits seeping from the country’s banks, Frankfurt was propping up the banks with approximately € 90 billion in emergency liquidity assistance (ELA).

On April 20th, a €450 million IMF loan repayment fell due, sparking concern that Greece would default. In the event the ECB blinked and continued to provide a lifeline to Greece. The bill was paid.

As crisis talks continued throughout May and June, serious fears persisted about Greece’s continued membership of the single currency. On June 29th the ECB capped the ELA it was providing to the Greek banking system, effectively initiating the introduction of capital controls.

Greece shut its banks and limited ATM withdrawals and transfers. As the crisis deepened, it failed to make a €1.5 billion repayment to the IMF by midnight on June 30th, becoming the first western country to default in the institution’s history.

With an ECB repayment deadline looming on July 20th, the climax of the Greek saga unfolded over the weekend of July 12th, when Alexis Tsipras finally bowed to pressure and signed up to a €86 billion three year bailout.

More than five years after Greece became the first euro zone country to seek an IMF-EU bailout, the country was once again signing up to an austerity programme, this time under a radical left government.

Remarkably, Alexis Tsipras succeeded in maintaining his position as prime minister despite signing up to a vastly more punitive austerity programme than anything that had been envisaged at the beginning of the year.

A general election in September, the country’s fifth in six years, helped him to gain a political mandate for his decisions and to purge the more radical wing of his own party.

As the country faces into 2016, significant hurdles still remain. Further reforms to the pension system, privatisation schemes and tax changes await the Greek people as Greece prepares for its first programme review mission under the third bailout which is now likely in February.

Whether the final act in the Greek drama has been played remains to be seen.