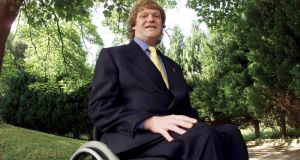 Brian Crowley: has been confined to Cork University Hospital due to ill health

The news this week that Ireland has the worst voting record in the European Union in terms of participation at the plenary session of the European Parliament has thrown the performance of Ireland’s 11 MEPs into the spotlight.

The two poorest performers, Brian Crowley and Luke “Ming” Flanagan, with a voting rate of 0 per cent and 16 per cent respectively, both have mitigating circumstances. Crowley has been confined to Cork University Hospital due to ill-health, while Flanagan’s wife has been ill and he has said he is unable to travel to Brussels and Strasbourg since the birth of a baby.

Ironically, a replacement system of sorts is already in existence. Under Irish electoral law, candidates running for election in the European elections in Ireland are obliged to nominate a list of substitutes who will replace the MEP should they vacate their seat. Political parties are required to present up to six names, while Independent candidates can submit four names.

That replacement system has been invoked a number of times in recent Irish political history, usually as a result of MEPs winning seats in national elections. Paul Murphy automatically replaced Joe Higgins, when he was re-elected to the Dáil in the 2011 general election. While Clare Daly and Ruth Coppinger had originally been ranked higher on the list, they had been elected to other offices by the time Higgins stood down. Similarly, Colm Burke replaced Simon Coveney when he returned to the Dáil in 2007, while Labour’s Emer Costello replaced Proinsias De Rossa when he stepped down as an MEP in 2012.

Technically an MEP is free to resign for any reason including personal reasons such as illness. However, there is no imperative for them to resign due to illness, nor is their salary withheld for non-attendance, though their expenses, including the €304 daily unvouched expenses, can be cut by the European Parliament. One disincentive for resigning for personal or other reasons may be that once a replacement candidate is appointed the original MEP cannot return to that position.

The issue of Irish MEPs’ non-attendance has also refocused debate on the method of electing them in Ireland. A number of member states use a list system to elect candidates, whereby political parties pre-select a list of candidates and voters then vote for the party, not for an individual. In contrast, the Irish system focuses on individual candidates, compelling MEPs to canvas as they would for a national election. It also incentivises MEPs to maintain a public profile domestically for the duration of their tenure in Strasbourg and Brussels.

While the public will have sympathy for his personal situation, they will also be closely watching his attendance record over the next 4½ years. Most working families do not have the option of taking sustained periods of time off work on full salary, whatever their personal circumstances.

As the fifth plenary session of this European Parliament got under way this week in Strasbourg, MEPs voted on a number of important issues of particular pertinence to Ireland, including the re-election of Emily O’Reilly as European ombudsman and a motion to recognise the state of Palestine.

With three of Ireland’s MEPs absent – Nessa Childers did not attend this session for medical reasons – almost one-third of Ireland’s representatives at the European Parliament were absent.

At a time when the European Parliament has assumed increasing powers, Ireland’s status as the worst-performing EU country in terms of voter participation at the plenary session is something that should be reversed in the remaining years of the current European Parliament.