Thousands gather to protest outside parliament as talks continue 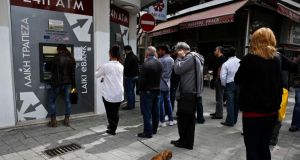 People queue up to make a transaction at an ATM outside a branch of Laiki Bank in Nicosia, Cyprus today. Photograph: Yannis Behrakis/Reuters. 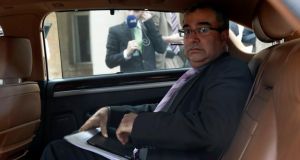 Cyprus Central Bank Governor Panicos Demetriades leaves the presidential palace in Nicosia today. The European Central Bank set Cyprus a Monday deadline to agree a bailout plan, threatening to cut off funding to the islands' cash-strapped banks if a program is not agreed by then with the EU and the IMF. Photograph: Yorgos Karahalis/Reuters

Cyprus looks close to agreeing a new proposal to radically restructure its banking sector in a desperate effort to avoid default and financial collapse.

Under a proposal hammered out by Cypriot authorities and troika representatives, Cyprus’s second largest bank, Laiki may be closed and split into a “good” and “bad” bank.

The proposal could see Laiki’s “good” bank, comprising deposits of €100,000, merge with the country’s largest lender, Bank of Cyprus. The remaining, larger deposits would be hived off, leaving uninsured depositors facing potentially much larger write-downs than the 9.9 per cent levy proposed in the original EU-IMF deal proposed last Tuesday.

“The banking system needs restructuring otherwise it will go bankrupt and it needs to be done immediately,” Cyprus’s central bank governor Panicos Demetriades said, stressing that depositors below €100,000 would be protected and jobs saved.

A capital control bill, designed to prevent an outflow of deposits from Cyprus when banks re-open, went through Parliament tonight, giving the Cypriot minister of finance and Central Bank governor emergency powers to “take and impose temporary restrictive measures, including restrictions on capital controls.” This includes powers to limit withdrawals and transfers of money.

In addition, the government proposed the creation of a new investment fund, which would be funded by revenue from state assets to help the country raise a portion of the €5.8 billion demanded by the EU and IMF lenders.

In total, seven separate bills are under discussion in Parliament tonight as demonstrators protested outside parliament against the measures.

A chant of “Oxi, No, to taxes on deposits,” ran though the throng of people pushing against riot police manning the barricades. “Hands off Laiki,” others cried, including weeping bank staff and depositors.

Banks remain shut until Tuesday and ATMs were re-stocked with limited amounts of money. But rumours throughout the day of a closure of Laiki prompted long queues outside some banks, and protests by workers.

A €260 per day limit was implemented on ATM withdrawals in an effort to cope with demand for cash.

The ECB, which has been supporting Cyprus’s banks with emergency liquidity assistance, said the government had until Monday to get a deal in place. “Thereafter, Emergency Liquidity Assistance (ELA) could only be considered if an EU/IMF programme is in place that would ensure the solvency of the concerned banks,” it said.

With Cyprus’s financial system facing default , ratings agency Standard & Poor’s warned last night that the risk of a “disorderly credit event” in Cyprus was rising following the parliament’s rejection of the EU-IMF proposal on Tuesday. It lowered its long-term sovereign credit rating on Cyprus to ‘CCC’ from ‘CCC+’ with negative outlook.