Cuba casts aside rancour to welcome Obama on historic visit 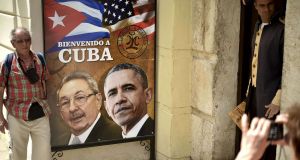 A tourist poses for a picture with a sign placed at the entrance of a restaurant with the images of Cuban and US Presidents Raul Castro and Barack Obama in Havana, Cuba on Saturday. Photograph: AFP/Getty Images

President Barack Obama arrives in Cuba on Sunday for a 48-hour visit, making history by venturing into what was once enemy territory and sparking enthusiasm among Cubans who have seen their Communist government vilify 10 previous US leaders.

The visit, the first by a US president in 88 years, would have been unthinkable until Obama and Cuban president Raul Castro agreed in December 2014 to end an estrangement that began when the Cuban revolution overthrew a pro-American government in 1959.

Plainclothes police have blanketed the capital with security while public works crews have busily laid down asphalt in a city where drivers joke they must navigate “potholes with streets.”

Welcome signs with images of Obama alongside Castro popped up in colonial Old Havana, where Obama will tour on Sunday afternoon shortly after landing.

“Obama has been brave for agreeing to relations with Cuba,” said school teacher Elena Gonzalez (43).

Major differences remain, notably the 54-year-old economic embargo of Cuba. Obama has asked Congress to rescind it but has been blocked by the Republican leadership. Instead, Obama has used executive authority to loosen trade and travel restrictions.

Cuba also complains about the continued occupation of the naval base at Guantanamo Bay, which Obama has said is not up for discussion, and US support for dissidents and anti-communist radio and TV programs beamed into Cuba.

“There are many years of mistrust and we are not going to change our system, our values,” said Ileana Valdes (55) a nurse. “Although one must highlight that there are no longer invasions.”

The Americans in turn criticize one-party rule and repression of political opponents. Cuban police briefly detained more than 200 activists in the days before the visit, dissidents said.

Little progress on such issues is expected when Obama and Castro meet on Monday or over state dinner that night.

Instead, the highlights are likely to be Obama’s speech on live Cuban television on Tuesday, when he will also meet dissidents and attend a baseball game between the Cuban national team and the Tampa Bay Rays.

“Times change and it’s great that we have relations with the United States, even though they still impose the embargo,” said Barbaro Echevarria, 28, a medical student. “But we can’t blame all our problems on the US embargo.”