If approved, revised agreement will lead to demobilisation of 7,000 rebels 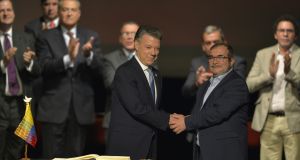 Colombian president Juan Manuel Santos and the Farc head Rodrigo Londoño Echeverri, aka Timoleón Jiménez or Timochenko, shake hands during the second signing of the historic peace agreement between the Colombian government and the Farc, in Bogota, Colombia. Photograph: Luis Robayo/AFP/Getty Images

Colombia’s government has signed a revised peace accord with Marxist rebels to formally end five decades of civil war, a month after voters narrowly rejected the original agreement in a referendum. The deal agreed yesterday, which has won international support from the Obama administration, the EU and fellow Latin American leaders, will not be put to a popular vote but will instead be submitted for approval by congress, where President Juan Manuel Santos’s governing coalition has a majority.

If approved, which political observers expect, the revised agreement will lead to the demobilisation of some 7,000 rebels of the Revolutionary Armed Forces of Colombia, or Farc.

“We have the unique opportunity to close this painful chapter in our history that has bereaved and afflicted millions of Colombians for half a century,” Mr Santos said last week as he pledged to sign the deal with Rodrigo Londoño Echeverri , the guerrilla commander known as Timochenko.

The changes in the text include an inventory of rebel assets, which will be used to compensate victims, and scrapping the inclusion of the peace accord in the constitution. It also clarifies private property rights and details how the Farc would be confined in rural areas as punishment for their crimes during the war.

Yet the signing ceremony in the capital Bogotá took place amid cries of foul from critics who have vowed to fight tooth and nail against the new pact. Opponents say Mr Santos has pushed through a deal that is only cosmetically different from the one that was rejected in the referendum. A particular concern is that the rebels’ participation in politics has not been changed. Critics also claim that Mr Santos’s peace efforts are a vanity project aimed at securing his place in history.

The president, who was awarded this year’s Nobel Peace Prize for his efforts to end a conflict that killed more than 250,000 people and displaced 7 million, said the new accord “possibly won’t satisfy everybody, but that’s what happens in peace accords”. He has warned that another plebiscite could further divide the nation and endanger the fragile ceasefire.

Álvaro Uribe, the divisive but popular former president who spearheaded the campaign against a deal with the Farc, said that without more significant changes, the new accord “is merely a retouch of the agreement rejected by the citizens”. Óscar Naranjo, a government peace negotiator countered:“This is the best agreement we could have. Let’s try to avoid apocalyptic forecasts and work together towards its implementation.”

However the decision to ratify it in congress rather than via a new referendum has angered politicians from Mr Uribe’s Democratic Centre party. Notwithstanding the signing of the deal, the political battle over how to end the long-running conflict has strengthened his position by casting doubt on Mr Santos and his deals with the Farc “narco-terrorists”. The former leader and his party now have a strong footing from which to challenge for the presidency in the 2018 election.

“This accord will have a huge problem of legitimacy and those in the opposition will try to deepen this whenever they can,” said Sandra Borda, a Bogotá-based political analyst. “They will openly set a political platform against the peace accord – making it already the central issue for the next presidential election.”

Many Colombians feel hatred towards the Farc, viewing them as drug-traffickers and human-rights abusers. While the rebel commanders have been slow to understand this, one of their leaders, Pablo Catatumbo, said as the revised deal was being thrashed out in Cuba there should be “no more delays” in implementing an agreement. He also slammed Mr Uribe who “never wanted peace but the defeat of the Farc, which he couldn’t get”. – Copyright The Financial Times Limited 2016