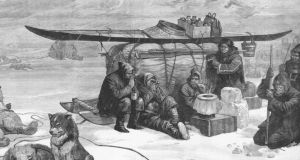 One of two British ships belonging to the Franklin Expedition, that disappeared more than 160 years ago, has been found. Pictured is an engraving of Lieutenant Frederick Schwatka’s party searcing for the missing expedition. Photograph: Getty Images

Canadian explorers have found the wreck of one of two ships lost in the 1845 Franklin expedition to Canada’s Arctic, helping to clear up an enduring historical mystery.

Sir John Franklin and his 128 crew in the British ships Erebus and Terror were seeking the fabled Northwest Passage between the Atlantic and Pacific oceans when they became stuck in ice. The men all died and the ships vanished.

Canadian divers and arch- aeologists had been trying since 2008 to find the ships, which became ice-bound off King William Island in the Victoria Strait in the Arctic territory of Nunavut.

“I am delighted to announce that this year’s Victoria Strait expedition has solved one of Canada’s greatest mysteries, with the discovery of one of the two ships belonging to the Franklin expedition,” prime minister Stephen Harper said in a statement. Finding the first vessel will no doubt provide the momentum - or wind in our sails - necessary to locate its sister ship and find out even more about what happened to the Franklin Expedition’s crew.”

The mystery has gripped Canadians for generations, in part because of the crew’s grisly fate. Local Inuit say the desperate men resorted to cannibalism before they died.

Mr Harper said experts did not yet know whetherthe ship found was the Erebus or the Terror. Theywas hard to find because they two had drifted in ice for hun- dreds of miles and the Inuit gave conflicting accounts of where they sank.

Covid-19: Trump goes on defensive as Biden claims president has ‘quit on America’ 09:50
Coronavirus: US sets single-day record cases during new surge 08:16
Coronavirus: Frances passes 1m cases; Europe sees record number of new infections 22:05
US election: Trump travels to Florida as he steps up campaigning 21:05
Sudan to normalise ties with Israel in move dubbed by Palestinians as ‘a stab in the back’ 19:48