Activists on forced adoption say story is a global one, and still needs telling 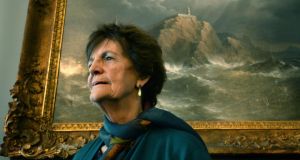 Philomena Lee: her success in highlihting the wrongs done to women and babies in Ireland subjected to forced adoptions is helping to inspire campaigners in Canada to bring similar abuses there to light. Photograph: Brenda Fitzsimons/The Irish Times

When Valerie Andrews heard an interview last year on the CBC, Canada’s state broadcaster, with Irish adoption campaigner Philomena Lee, she thought “great, but why don’t you give us some airtime?”

“We are here, we are the Canadian Philomenas,” says Andrews, who has been fighting for years to have the story of Canada’s mother-and-baby homes unearthed and acknowledged.

Canada’s tale is all too familiar: pregnant single women incarcerated in religious homes, forced to attend church and carry out unpaid labour; babies removed after birth and illegally adopted, with no way of tracing them.

Testimonies, trickling out slowly from under layers of grief and shame, suggest what happened was just as extreme as what occurred in Ireland, contends Andrews, executive director of Origins Canada, an adoption rights group.

But the Canadian story is yet to have its breakthrough moment, one, perhaps like the Philomena movie, that pierces public consciousness in a way that makes the issue impossible to ignore.

In 1969, at 16, Andrews was put into a Salvation Army-run home in Toronto because she was pregnant. She was forced to stay there and her infant son was taken from her. She was reunited with him 31 years later, seven years before he died from cancer.

Her story is just one of what she estimates to be upwards of 350,000 unmarried Canadian mothers who were persuaded, coerced or forced into giving children up for adoption.

Some women were told their children were dead; babies were routinely sent to the US for adoption, Andrews contends. Today, those women want acknowledgement and accountability, records and apologies.

Around the world, from Ottawa to Dublin, Sydney to Philadelphia, women at grassroots level are compelling governments and institutions to face what occurred during what’s defined in the US as the “Baby Scoop Era.”

While each country has unique features, they are all part of an international story, whereby babies, from the late 1940s to the 1970s, were taken from young mothers deemed morally unfit to raise them.

Australia has already had an inquiry, which led to funding and formal government apologies for those separated by adoption, while in Ireland the Government has announced the establishment of a commission of inquiry into mother-and-baby homes.

Campaign successes ripple around the world and adoption activists network to help each other out.

Mari Steed, the daughter of an Irish Magdalene laundry survivor who was forced to give her up for adoption to the US, and is now director of the Justice for Magdalenes campaign group, was invited by Origins Canada in 2012 to tell her story there and share news of progress made in Ireland.

Steed says that though the battle for justice for those affected by forced adoptions has been quietly going on across the world since the late 1980s, it’s only in the last ten years that people have been willing to share their stories publically.

“With the advent of social media, groups are leveraging and learning from one another, sharing tips and tricks,” she says. It’s a slow process though, hampered by resistence from governments and churches seeking to protect their reputations, and by the continuing reluctance of many women to speak out.

“Nobody wants to talk about it, it takes guts,” says Steed. “We’ve had very few Magdalene survivors who have come forward...It’s painful and still stigmatising, especially for the mothers. Philomena was so great for the cause, because here you have an octogenarian saying ‘this happened to me’.”

Andrews, too, lauds Philomena Lee and the Hollywood effect on the movement. “She’s been great for the cause. It has absolutely helped us. We will be keeping a close eye on the Irish inquiry,” she says.

The Canadian movement needs any boosts it can get. Widespread media coverage of forced adoptions gripped the nation in 2012, and there seemed to be momentum for some form of national inquiry. Two years later, the impetus for coming to terms with this dark past has been lost.

“We are waiting for a change of government. Meanwhile, we continue to meet with politicians behind the scenes and educate them about the issues.”

Origins Canada wants an inquiry, similar to the one that took place in Australia in 2012 that was secured by parent group Origins Australia.

“When we show politicians in Canada what went on in Australia, the senate inquiry, the apology, it makes them sit up and listen. I don’t know any women that are looking for money out of this, they want acknowledgement and recognition, an investigation. Not doing so is re-victimising women.”

Andrews, who is writing a thesis on the Canadian story, sees the same patterns as Steed talks about in Ireland.

“When stories started to come out here in 2012, I got so many calls from women, so afraid, who’ve been keeping their secret for 30 years,” she says.

“Mothers are still so filled with the shame, and many are unable to move past that shame and secrecy. At Origins, we listen to their stories and they slowly learn that what happened to them was wrong.”

High-profile grandson of Nazi commander accused of serial fraud 19:00
British tourists scramble to leave France before quarantine 18:33
Exams U-turn urged in England amid chaos over A-level results 09:34
Israel eyes other Arab nations after establishing ties with UAE 18:15
Hundreds of children returned to Libya from Mediterranean in 2020 17:45