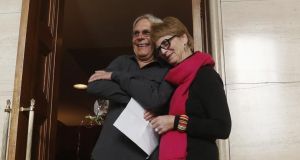 Lee Carter (R) stands next to her husband Hollis Johnson at the Supreme Court of Canada in Ottawa which overturned a ban on physician-assisted suicide on Friday. Ms Carter’s mother, Kay Carter, traveled to Switzerland to end her life in 2010. Photograph: Chris Wattie/Reuters.

The Supreme Court of Canada overturned a ban on physician-assisted suicide on Friday, unanimously reversing a decision it made in 1993. The move puts Canada in the company of a handful of Western countries where the practice will be legal.

The top court said it would be allowed in the case of consenting adults who are suffering intolerably from a severe and incurable medical condition, whether physical or psychological, and the illness does not have to be terminal. The decision takes effect in 12 months.

“We do not agree that the existential formulation of the right to life requires an absolute prohibition on assistance in dying, or that individuals cannot ‘waive’ their right to life,” the court said.

Friday’s decision related to the case of two women with debilitating illnesses who have since died.

Gloria Taylor, a Motor Neurone Disease patient and activist, who joined the right to die lawsuit in 2011, died of her illness in 2012.

The family of a second woman, Kay Carter, who traveled to Switzerland to end her life, was also a plaintiff. Assisted suicide is legal in Switzerland, along with a handful of other European countries and a few US states.

Canada’s Supreme Court, which last considered assisted suicide in 1993, agreed last year to take another look at the issue.

The Court majority was a narrow 5-4 in the 1993 decision. The sole judge left on the court from that time is Beverley McLachlin, now chief justice, and she was in the dissent last time.

“This is one incredible day,” said Grace Pastine, litigation director of B.C. Civil Liberties Association, which initiated the challenge.

“Physician-assisted dying is now recognized for what it is: a medical service that brings an end, for some individuals, to unbearable suffering.”

Parliament can overturn the decision but that is an unlikely outcome. Canadian parliamentarians, heading into a federal election in October, will have a year to implement a regulatory framework.

Parliament has previously rejected several attempts to legalise physician-assisted suicide through bills brought by its members.

Religious groups and organisations representing disabled people had opposed any relaxation of the ban, arguing that this would make them vulnerable to being killed.

Others, such as quadriplegic Conservative Member of Parliament Steven Fletcher, argued that they should have the choice.

“There does need to be some criminal code provision, I think, to prevent abuse. I don’t want people, because they have a bad hair day, to get their car mechanic to take them down,” Mr Fletcher said in the lobby of the court on Friday.

“We want to make sure that we move forward quickly, but thoughtfully, and the Supreme Court has really given us a clear path.”