Britain 'can live' with no deal, says Johnson 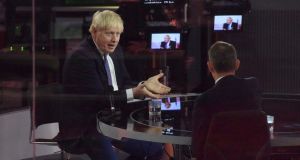 British and European Union leaders have indicated a deal is not yet in sight with just weeks remaining to clinch a trade agreement in time for the end of the Brexit transition period.

Prime minister Boris Johnson said on Sunday he was not wedded to leaving without a deal – a scenario forecast to cause profound economic disruption for Britain and its neighbours – but nevertheless the UK could “more than live with” such an outcome.

His comments came a day after a video conference with European Commission president Ursula von der Leyen in which the two took stock of the latest round of negotiations and acknowledged “significant gaps” remained between the two sides.

The two agreed to continue negotiations to try to find an agreement “if at all possible”, according to a joint statement, and talks are expected to continue in London in the coming week.

“I think it’s there to be done,” Mr Johnson said during in a television interview on Sunday.

“Alas, there are some difficult issues that need to be fixed, and there’s no question that the EU needs to understand that we’re utterly serious about needing to control our own laws and our own regulations, and similarly they need to understand that the repatriation of the UK’s fisheries... is very important.”

When asked if he was concerned about the economic impact of an abrupt shift to EU-UK trade relations if no deal was clinched by on January 1st, Mr Johnson played down the prospect. “I don’t want the Australian WTO-type outcome, particularly, but we can more than live with it,” he said.

“I think the people of this country have had enough ... of being told that this will be impossible or intolerable. I think we can prosper mightily under those circumstances.”

Taoiseach Micheál Martin last week said it was unlikely that a deal could be reached before the 27 EU leaders meet on October 15th-16th, when they are due to assess progress in the negotiations.

The European Union believes that the start of November is the last moment in which a deal could be reached, in order for it to be approved and enacted in time for 2021.

The British government has warned importers and exporters that extra paperwork is imminent irrespective of whether a deal can be found, and that there could be queues of trucks stretching 100km if insufficient preparation is done.

The joint statement from Mr Johnson and Dr von der Leyen pointed to “fisheries, the level playing field, and governance” as the main areas of contention, the same sticking points that have persisted throughout the year. Both sides have insisted that the other will have to compromise in order for a deal to be found.

“The logical outcome of all of this is that we would have a sensible, sane agreement,” Mr Martin said after addressing EU leaders on Friday, while warning that significant differences remained.

As talks continue, the European Commission has launched infringement proceedings against the British government for threatening to breach part of the withdrawal agreement signed last year through the introduction of its internal market Bill, which would reverse arrangements agreed to avoid a trade border on the island of Ireland.