Breastfeeding mothers in Britain to be encouraged with vouchers 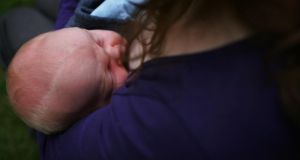 In Boythorpe, Chesterfield, just one in five mothers breastfeed their babies, a number that has remained stubbornly static for more than two decades.

For some in Boythorpe, the problem is that they are not aware of breastfeeding’s benefits, or they do not know how to do it. For others, there is a feeling that it is somehow “wrong”.

The Derbyshire suburb is far from untypical in the UK, where the number of children who are breastfed until they are six months old is one of the lowest in the developed world.

In 2010, 83 per cent of babies were breastfed in the days after birth in England, compared with 74 per cent in Scotland, 71 per cent in Wales, and 64 per cent in Northern Ireland.

However, the numbers had fallen away at the six-week mark to just 24 per cent in England, 22 per cent in Scotland, 17 per cent in Wales and 13 per cent in Northern Ireland. By the time the babies were five months old, just 3 per cent were exclusively breastfed.

Researchers are to run trials in Boythorpe and in Manor, a district of Sheffield in south Yorkshire, where new mothers will be given £200 (€238) worth of vouchers in staggered payments over the first six months of their babies’ lives.

“Offering financial incentives for mothers might increase the numbers of babies being breastfed,” said lead researcher Dr Clare Relton of the University of Sheffield’s school of health and related research.

“In some places, women have never seen another breastfeed, the skills have been lost in many communities,” she said at the launch of the Nourishing Start for Health study.

Half the vouchers will be for supermarket chains and half for high-street stores. No curbs will be placed on what they can be spent on.

The four-month trial will, if it proves manageable, be followed by longer research next year, where the breastfeeding records of mothers given vouchers will be compared with a group receiving no such encouragement.

However, significant social barriers must be overcome, said Prof Mary Renfrew of the University of Dundee: “A woman who is young, white, comes from a low-income area, will often tell you that it is embarrassing to breastfeed in public, or even in her own home.

“That is the community norm. Young women have even told us that it is immoral to breastfeed in public because breasts have become very sexualised in the media. They see exposing themselves in any way as challenging.”

Health benefits
The health benefits are unquestioned. Breastfed babies have fewer gastrointestinal or lower respiratory tract problems, while the odds of premature babies suffering from necrotising enterocolitis are reduced if they are breastfed. “We know for certain that regardless of the socio-economic background that those diseases will be prevented more by breastfeeding. And for women [there is a reduced risk of] breast cancer,” Prof Renfrew said yesterday.

Babies from wealthier neighbourhoods are more likely to be breastfed, though one study shows a breastfed baby from a poor community is likelier to be healthier than one from a better-off background who is not.