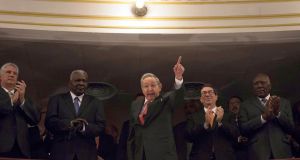 US president Barack Obama told the Cuban people in a televised address that he had come to Havana on his historic visit “to bury the last remnant of the cold war” and urged them to embrace change.

Speaking to an audience that included Cuban president Raúl Castro at the Gran Teatro in Havana, Mr Obama said that Cuba was only 90 miles (145km) from Florida “but to get here we had to travel a great distance, over barriers of history, of ideology, barriers of pain and separation”.

The US president, the first to visit Cuba since 1928, described the long and bitter history between the two countries, from the Cuban missile crisis to the US-backed Bay of Pigs invasion to the cold war.

“One constant was the conflict between the United States and Cuba. I have come here to bury the last remnant of the cold war in the Americas,” he said.

“I am here to extend the hand of friendship to the Cuban people,” he said. “The differences between our governments over these many years are real and they are important.”

Mr Obama said that there was “an evolution” and “a generational change” taking place inside Cuba. He had been urged to come here and “ask the people to tear something down,” he said, but that he had instead wanted to lift something up.

“The future of Cuba has to be in the hands of the Cuban people,” he said in Spanish.

He described the nations as “like brothers that’ve been estranged for many years” adding that both were built by slaves brought from Africa.

“I know the history but I refuse to be trapped by it,” he said.

Explaining his decision to re-establish diplomatic ties in December 2014 after more than 50 years of division, Mr Obama said that many on both sides of the debate about Cuba had asked: why now?

“There is one simple answer,” he said. “What the United States was doing was not working. We have to have the courage to face the truth. A policy of isolation designed for the cold war had no place in the 21st century,” he said.

The 44th president, the first to visit Cuba since Calvin Coolidge 88 years ago, said that he believed “our grandchildren would look back on this period of isolation as an aberration”.

Recalling Martin Luther King jnr’s phrase about the “fierce urgency of now”, Mr Obama said: “We should not fear change, we should embrace it.”

“I believe citizens should be free to speak their mind without fear,” he said, to just a smattering of applause among the invited audience.

“To organise and to criticise the government, and to protest peacefully, and that the rule of law should not include arbitrary detentions of people who exercise those rights.”

Mr Obama signed off with a hopeful message to the Cuban people: to look to the future.

“It is time now for us to leave the past behind. It is time for us to look forward together. Un futuro de esperanza [A future of hope],” he said.

“My time here in Cuba renews my hope and my confidence in what the Cuban people can do. We will make this journey [together].”

He concluded with: “Sí se puede” – his trademark rallying call “yes we can” recast for his audience – to sustained applause from a receptive assembly listening to a US president speak in Cuba for the first time in generations.