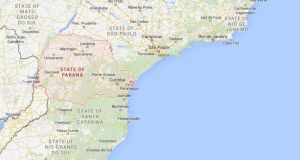 A passenger bus plunged off a cliff in the southern Brazilian state of Santa Catarina on Saturday, killing more than 40 people, emergency response officials said. It was en route to Parana State when the incident occurred. Image: Google maps.

A passenger bus plunged off a cliff in the southern Brazilian state of Santa Catarina on Saturday, killing more than 40 people, emergency response officials said.

The bus was carrying families going to an evangelical Christian event in Parana state when the driver lost control on a curve in a highway through the Dona Francisca mountain range.

As crews worked into the night to recover bodies, the police said the death toll could climb to as high as 55, including children.

The episode reflects the hazards of Brazil’s roads, with the country ranking among the worst in traffic-related deaths. More than 40,000 people a year are estimated to die in traffic incidents in Brazil, according to the World Health Organisation.

Authorities have been trying reduce fatalities by cracking down on speeding and drunken driving, but many drivers still chafe at these measures.

The cause of the crash Saturday in Santa Catarina, one of Brazil’s most prosperous states, was not immediately clear, but the curving highway through the mountains is known as dangerous.

Pedro Ivo Ilkiv, the mayor of União da Vitória, the city of about 52,000 that was home to many of the crash victims, declared a period of mourning.

Local media reported that several people, including children, had survived.