World review of the year: Fears of more US tension in 2016 on maritime ambitions 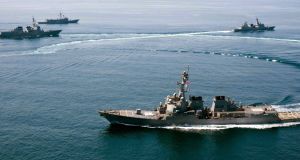 In October, the US Navy sent the USS Lassen, a guided-missile destroyer, on patrol within 12 nautical miles of Subi Reef in the Spratly archipelago. China responded by accusing Washington of having a “cold war mentality”. Photograph: Evan Kenny/EPA/US Navy

Was there a more potent image in 2015 to represent China’s newfound confidence in matters of foreign policy than the satellite photograph of a land reclamation project on the Fiery Cross Reef in the Spratly archipelago?

The clear photo showed the construction of a three-kilometre airstrip and facilities, a project the US Navy calls the ‘Great Wall of Sand’.

While the slowing economy percolated through the year, in geopolitical terms China’s growing confidence in pushing its regional ambitions, and the United States’ robust reaction, was a major development.

China has territorial disputes with nearly all its neighbours over its claims in the South China Sea, including the Philippines, Vietnam, Malaysia, Taiwan and Brunei, but this was the year where Beijing felt confident enough to pursue its efforts to enforce the “nine-dash-line” marking claims of the major part of the maritime region on the international stage.

“You can’t build sovereignty,” was the message from the US state department. Many of China’s neighbours in the region weren’t so sure.

The Great Wall of Sand is a bulwark against counterclaims by Vietnam, the Philippines and Taiwan, all of which claim sovereignty. While China describes the facilities as lighthouse bases, the US said its intelligence shows runways where bombers can land.

There are occasional appeals to international law. The Philippines has asked the Permanent Court of Arbitration in the Hague to affirm its right to areas within 200 nautical miles of its coastline, under the terms of a UN convention.

But building continues apace. People’s Liberation Army builders are working on two, maybe three, additional airstrips on newly built islands in the Subi Reef and nearby Mischief Reef in the Spratlys, while in the Paracel island chain, China now operates one airfield at Woody Island with J-11BH/BHS fighters in situ.

The islands are built on a key trade route through which more than €4.5 trillion worth of world trade passes each year, including a large part of the world’s oil shipments.

President Xi Jinping, who is also chairman of the Central Military Commission, has been keen to modernise the military, and during September’s exhaustive military parade in Beijing to mark the 70th anniversary of Japan’s defeat in the Second World War, he announced that the PLA would shed 300,000 troops.

The National People’s Congress in March approved funding to expand its navy “to protect China’s maritime interests”. The country’s navy has been modernising during the year, warships taking part in anti-piracy patrols in the Gulf of Aden and extracting nationals from conflict zones in Libya and Yemen.

In May, Washington flew a spy plane over areas near the Spratlys, with both sides accusing each other of stoking instability in the region.

Then, in October, the US Navy sent the USS Lassen, a guided-missile destroyer, on patrol within a 12-nautical-mile exclusion area around one of the islands.

China responded by accusing Washington of having a “cold war mentality” and warning that the US actions could lead to conflict.

“We should give credit to Uncle Sam. As an irrelevant party in the dispute, the country has spared no effort to create fanfare in the South China Sea, accusing China of harming navigational freedom, though evidence has seldom been presented on how harm was done or how shipping lanes have been threatened by China’s island construction, which is primarily used for creation of two lighthouses,” ran a commentary on the Xinhua news agency.

President Xi has been careful to deflect claims that China has expansionist ambitions.

“Expansionism refers to laying claims to land outside one’s own territory. China has never done anything like that, so such doubts or accusations are unwarranted.”

The area looks set to remain a hotspot in 2016. US Pacific fleet commander Admiral Scott Swift warned in December of an arms race in the region that could lead to conflict.

“My concern is that, after many decades of peace and prosperity, we may be seeing the leading edge of a return of ‘might makes it right’ to the region,” Swift said.