Six days after super Typhoon Haiyan swept through parts of the Philippines, a mother gave birth to baby girl in Tacloban city on Thursday. Surrounded by her family, Marilou Casim delivered her baby in a church also serving as an evacuation centre. 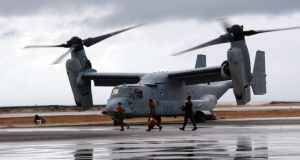 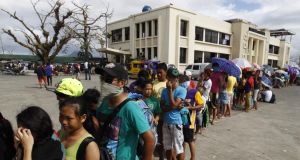 Typhoon survivors queue up to charge their mobile phones at a generator provided for by the government in Tacloban city in central Philippines. Photograph: Edgar Su/Reuters.

A US aircraft carrier “strike group” started unloading food and water to the typhoon-ravaged central Philippines today, as president Benigno Aquino faced mounting pressure to speed up the distribution of supplies.

While relief efforts picked up, local authorities began burying the dead - an important, if grim, milestone for a city shredded by one of the world’s most powerful typhoons and the tsunami-like wall of seawater believed to have killed thousands.

“There are still bodies on the road,” said Alfred Romualdez, mayor of Tacloban, a city of 220,000 people reduced to rubble in worst-hit Leyte province. “It’s scary. There is a request from a community to come and collect bodies. They say it’s five or 10. When we get there, it’s 40.”

Many petrol station owners whose businesses were spared have refused to reopen, leaving little fuel for trucks needed to move supplies and medical teams around the devastated areas nearly a week after Typhoon Haiyan struck.

“The choice is to use the same truck either to distribute food or collect bodies,” Mr Romualdez added.

It is moored near where US General Douglas MacArthur’s force of 174,000 men landed on October 20, 1944, in one of the biggest allied victories of World War Two.

“Operation Damayan” started with the George Washington and two cruisers taking up position off Samar to assess damage and provide logistical and emergency support such as fresh water.

Ships carried 11 pallets ashore - eight containing 1,920 gallons of water and three containing food - at Tacloban airfield. Several pallets of water were taken to Guiuan, home to home to 45,000 people, which was also badly hit by the storm.

The carrier moved some fixed-wing aircraft ashore to make more room for the helicopters on the flight deck.

“One of the best capabilities the strike group brings is our 21 helicopters,” Mr Montgomery said in a statement. “These helicopters represent a good deal of lift to move emergency supplies around.”

Britain also said it would send a helicopter carrier, HMS Illustrious, to help in the relief effort. Japan was also planning to send up to 1,000 troops as well as naval vessels and aircraft, in what could be Tokyo’s biggest postwar military deployment.

Outside Taclaban, burials began for about 300 bodies in a mass grave today. A larger grave will be dug for 1,000, city administrator Tecson John Lim said.

The city government remains paralysed, with an average of just 70 workers compared to 2,500 normally, he added. Many were killed, injured, lost family or were simply too overcome with grief to work.

The government was distributing 50,000 “food packs” containing 6 kg of rice and canned goods each day, but that covers just 3 per cent of the 1.73 million families affected by the typhoon.

President Aquino has been on the defensive over his handling of the storm given warnings of its projected strength and the risk of a storm surge, and now the pace of relief efforts.

He has said the death toll might have been higher had it not been for the evacuation of people and the readying of relief supplies, but survivors from worst-affected areas say they had little warning of a tsunami-like wall of water.

Mr Aquino has also stoked debate over the extent of the casualties, citing a much lower death toll than the 10,000 estimated by local authorities. Official confirmed deaths stood at 2,357 today, a figure aid workers expect to rise.

City administrator Mr Lim, who on Sunday estimated 10,000 likely died in Tacloban alone, said Mr Aquino may be deliberately downplaying casualties. “Of course he doesn‘t want to create too much panic. Perhaps he is grappling with whether he wants to reduce the panic so that life goes on,” he said.

The preliminary number of missing as of today, according to the Red Cross, remained at 22,000. It has cautioned that that number could include people who have since been located.

Tacloban’s main convention centre, the Astrodome, has become temporary home for hundreds of people living in abject squalor. Families cooked meals amid the stench of garbage and urine. Debris was strewn along rows of seats rising from dark pools of stagnant water.

“We went into the Astrodome and asked who is in charge and just got blank stares,” said Joe Lowry, a spokesman for the International Organisation for Migration, which is setting up camps for the displaced.

Survivors formed long queues under searing sunshine, and then torrential rain, to charge mobile phones from the only power source available: a city hall generator. Others started to repair motorbikes and homes. A rescue worker cleared debris near a wall with the spray-painted words “We need food”.

More the 544,600 people have been displaced and nearly 12 per cent of the population affected, the United Nations said. But many areas still have not received aid.

“It’s true, there are still areas that we have not been able to get to where people are in desperate need,” US humanitarian chief Valerie Amos told reporters in Manila. “I very much hope that in the next 48 hours, that will change significantly.

“Yes, I do feel that we have let people down because we have not been able to get in more quickly.”

Anger and frustration have been boiling over as essential supplies fail to reach many of those in need. Food and other goods have stacked up at the airport in Tacloban, for instance.

Some areas have appeared to teeter near anarchy amid widespread looting of shops and warehouses for food and water.

“People are living out in the open ... The needs are immense and there are a lot of surrounding villages that are not yet covered by any aid organisations,” Alexis Moens, MSF’s assessment team leader, said in a statement.

Lim said 90 percent of Tacloban had been destroyed by the typhoon and the wall of seawater it shoved ashore. Only 20 per cent of residents were getting aid while houses were being looted because warehouses were empty, he added.

There were also not enough flights from Tacloban airport to cope with the exodus from the stricken city.

Many people complained that military families were given priority to board the C-130 cargo planes.

“If you have a friend or relative in the military, you get priority,“ said Violeta Duzar (57), who had waited at the airport since Sunday with eight family members, including children.

The overall financial cost of the destruction was hard to assess. Initial estimates varied widely, with a report from German-based CEDIM Forensic Disaster Analysis putting the total at $8 billion to $19 billion.