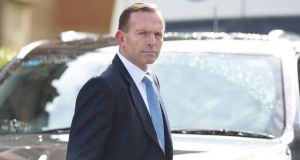 Australia’s prime minister Tony Abbott says security agencies have reported an increased level of “terrorist chatter” and that “an attack is likely”.

Speaking on the day memorial services were held for the two hostages killed in last week’s siege in Sydney’s Martin Place, Mr Abbott said he had convened a meeting of the national security committee with new defence minister Kevin Andrews and new immigration minister Peter Dutton.

“Our police forces and our security and intelligence organisations are doing everything they possibly can to monitor and disrupt all the threats to our security,” he said.

“The briefing from the security agencies today indicated there has been a heightened level of terrorist chatter in the aftermath of the Martin Place siege. That’s why it’s important that people remain alert and aware as well as reassured that our police and security agencies are doing everything they humanly can to keep us safe.”

Australia’s terrorism alert level was raised from medium to high last September, but Mr Abbott has urged people to go about their lives as normal.

“As you’ll all understand, at this level, an attack is likely. We don’t know when and how an attack may come, but we do know there are people with the intent and capability to carry out further attacks, and that’s why it’s important … that people are aware of the reality of these times,” he said.

The prime minister attended the memorial service for barrister Katrina Dawson, who was killed in last week’s siege. He described her as “a brilliant and beautiful woman from a wonderful and accomplished family who has been cruelly snatched away from us”.

“As we prepare to join family and friends to celebrate Christmas we do need to be conscious of the fact that the terror threat remains high,” he said.

In a separate development, the leader of the opposition New South Wales Labor Party, John Robertson, has resigned after revelations he provided electoral assistance to the Sydney siege gunman Man Haron Monis.

Mr Robertson had faced intense pressure from within his party after it was revealed on Monday that he had sent a letter to a government department on behalf of Monis in 2011.

The letter asked that Monis be allowed a supervised visit with his children despite being subject to an apprehended violence order and family court proceedings.

Racial tensions in Australia have been further heightened with incidents in New South Wales and Queensland. Two members of an anti-Muslim extremist group were refused bail after being charged over inciting a brawl in the Sydney suburb of Lakemba, where witnesses said they taunted locals with religious slurs.

“The last thing this community needs … is boofheads like this stirring up a certain section of the community,” Justice Les Brennan said.

In the Queensland town of Longreach a restaurant displayed a sign saying “sorry no Muslims”. Restaurant owner John Hawkes apologised to his family for the abusive phone calls they subsequently got, but did not apologise for the sign, which has since been taken down