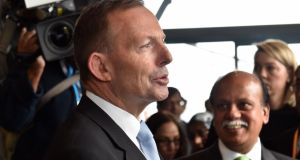 Australia has vowed to stop asylum-seekers reaching its shores, turning boats back to Indonesia when it can and sending asylum-seekers to camps in impoverished Papua New Guinea and Nauru for long-term detention. Photograph: Saeed Khansaeed/AFP/Getty Images

Australian prime minister Tony Abbott declined to comment on Friday on reports the Australian navy paid a group of people-smugglers thousands of dollars to turn around their boat packed with asylum-seekers, adding to a furore over the issue.

Australia has vowed to stop asylum-seekers reaching its shores, turning boats back to Indonesia when it can and sending asylum-seekers to camps in impoverished Papua New Guinea and Nauru for long-term detention.

This week, media in Australia and Indonesia reported that people-smugglers on a boat carrying 65 asylum-seekers were paid about A$5,000 (€3,440) each to abandon their journey to Australia and return to Indonesia after being intercepted at sea.

Australian foreign minister Julie Bishop and immigration minister Peter Dutton have both denied the reports, but Mr Abbott has declined to do so, citing operational security.

Indonesian foreign ministry spokesman Armanatha Nasir told reporters the captain of the asylum-seeker vessel was being detained on charges related to people-smuggling.

Mr Nasir said the captain and his crew told him that they had received $5,000 (€3,440) per person to turn back the ship, the Investor Daily newspaper on Friday cited him as saying.

Australian coastguard officials blocking the people-smuggling boat put the money in six black plastic bags and and handed it over, Mr Nasir quoted the captain as saying.

“According to them, that happened aboard the ship, the Australian coastguards went to the ship to give the money A$5,000 per person so that they go back to Indonesia,” Mr Nasir said.

“We will do further investigation, but if it is true, we are very sorry that it happened.”

The United Nations and human rights groups have criticised Australia over its tough asylum-seeker policy, which Mr Abbott defends as necessary to stop deaths at sea.

Australia is on high alert for attacks by radicalised Muslims including home-grown militants returning from fighting in the Middle East, having raised its threat level to “high” and unleashed a series of high-profile raids in cities.

Attorney general George Brandis did not outline the specifics of new legislation during his speech at the summit in Sydney on Friday.

He did, however, focus heavily on the challenge of stopping the spread online and via social media of militant propaganda, which he called one of the most pressing issues facing the government.

“I’m announcing this morning that the government will introduce further legislation. That legislation will take into account lessons learned from recent legislative amendments and counter-terrorism operations,” Mr Brandis said.

Mr Abbott has said about 100 Australians are believed to be fighting with militant groups in Iraq and Syria backed by about 150 Australia-based “facilitators”.

Security analysts estimate that thousands of foreign fighters are in Iraq and Syria, drawn by the rise of Islamic State militants and travelling from scores of countries around the world.

Mr Abbott last year warned that the balance between freedom and security in Australia “may have to shift”, and has made the battle against militants a focus of his government.

New data retention laws have expanded the ability to monitor domestic communications, citizens now face up to a decade in prison for travel to overseas areas declared off-limits and barriers between overseas and domestic spy agencies have been lowered.