Australian security forces on Tuesday stormed the Sydney cafe where several hostages were being held at gunpoint, in what looked like the dramatic denouement to a standoff that had dragged on for more than 16 hours. Video: Reuters

Gunfire is heard after a swarm of heavily armed officers stormed a cafe where a gunman had been holding people. Video: Reuters

Man Haron Monis, an Iranian refugee known for sending hate letters to the families of Australian soldiers killed overseas is the armed man holding an unknown number of hostages in a Sydney cafe, a police source said. Video: Reuters

Hostages were shown running out of a Sydney cafe at the centre of a siege today, according to Channel 7 live news footage. Police said an armed assailant was holding an unknown number of hostages inside the cafe. Video: Reuters 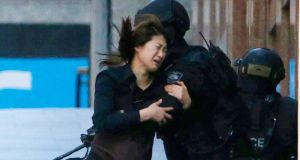 A hostage runs towards a police officer outside the Lindt cafe, where other hostages are being held, in Martin Place in central Sydney. Photograph: Reuters 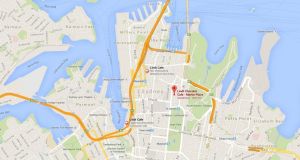 A dropped pin marks the spot where hostages are being held in the Martin Place Lindt Cafe in Sydney. Photograph: Google maps 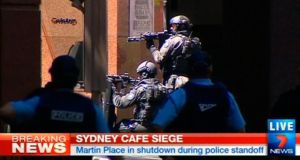 Armed police take up position near Lindt cafe in Sydney’s Martin Place, where hostages are being held, 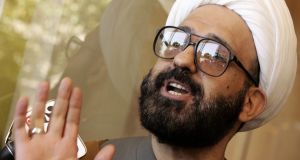 Man Haron Monis has been named locally as the man involved in the siege in the Lindt cafe in Sydney. Photograph: Sergio Dionisio/EPA 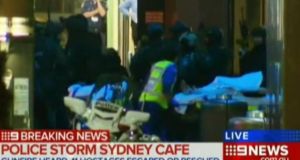 A screen grab from the 9 news channel in Australia showing emergency services at the scene of a hostage-taking in Sydney. 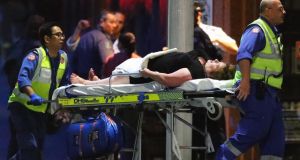 A person is taken out on a stretcher from the Lindt Cafe following the hostage standoff. Photograph: Joosep Martinson/Getty Images 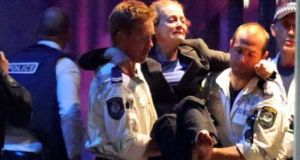 A woman carried out by police from the Lindt Cafe, Martin Place following the hostage standoff in Sydney, Australia. Photograph: Getty

llllllllllNew South Wales Police has confirmed three people have been pronounced dead following the Sydney siege — a 34-year-old man, a 38-year-old woman and a 50-year-old man who is believed to be gunman Man Haron Monis.

Australian security forces opened fire on Tuesday as they stormed the Sydney cafe where several hostages were being held at gunpoint, in a dramatic end to a standoff that had dragged on for more than 16 hours.

It was not clear whether the fatalities occurred during the rescue operation itself.

Heavy gunfire and loud bangs from stun grenades filled the air shortly after 2 am local time (1500 GMT on Monday).

Moments earlier at least six people believed to have been held captive managed to flee the scene after several loud bangs were heard coming from the cafe. Medics were seen trying to resuscitate one person after the raid and took away several injured people on stretchers, said a witness at the scene in downtow Sydney.

The operation began shortly after a police source named the gunman as Man Haron Monis, an Iranian refugee and self-styled sheikh facing multiple charges of sexual assault as well as being an accessory to murder.

He was also found guilty in 2012 of sending offensive and threatening letters to families of eight Australian soldiers killed in Afghanistan, as a protest against Australia’s involvement in the conflict, according to local media reports.

Although he was well known to the authorities, security experts said preventing attacks by people acting alone could still be difficult.

“There are two areas of concern. The first is Isis (Islamic State) fighters with foreign passports who return to their home countries to commit acts of terrorism.

“The second is Isis sympathisers radicalised on the internet who take it upon themselves to commit terrorist attacks to fulfil their radical ideology.

“We are entering a new phase of terrorism that is far more dangerous, and more difficult to defeat, than al Qaeda ever was.”

During the siege, hostages had been forced to display an Islamic flag, igniting fears of a jihadist attack.

Australia, a staunch ally of the United States and its escalating action against Islamic State in Syria and Iraq, is on high alert for attacks by home-grown militants returning from fighting in the Middle East.

News footage showed hostages holding up a black and white flag displaying the Shahada - a testament to the faith of Muslims.

The flag has been popular among Sunni Islamist militant groups such as Islamic State and al Qaeda.

At least five hostages were released or escaped on Monday, with terrified cafe workers and customers running into the arms of paramilitary police. A further 15 or so hostages were understood to have been holed up inside the cafe.

The incident forced the evacuation of nearby buildings and sent shockwaves around a country where many people were turning their attention to the Christmas holiday following earlier security scares.

In September, anti-terrorism police said they had thwarted an imminent threat to behead a random member of the public and days later, a teenager in the city of Melbourne was shot dead after attacking two anti-terrorism officers with a knife.

The siege cafe is in Martin Place, a pedestrian strip popular with workers on a lunch break, which was revealed as a potential location for the thwarted beheading.

In the biggest security operation in Sydney since a bombing at the Hilton Hotel killed two people in 1978, major banks closed their offices in the central business district and people were told to avoid the area.

Concerns about an attack in Australia by Islamists have been growing for more than a year, with the security agency raising its national terrorism public alert to “high” in September.