Tennis player Eugenie Bouchard asked to ‘do a little twirl’ 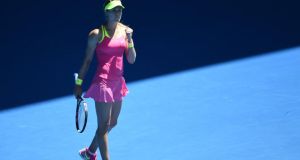 Eugenie Bouchard was asked by reporter Ian Cohen to “do a little twirl” and show off her outfit for TV cameras and the crowd at the Australian Open in Melbourne this week. Photograph: William West/AFP Photo

Eugenie Bouchard had no idea the man with the microphone in his hand and mischief in his heart would ask her to “do a little twirl” to show off her outfit for the TV cameras and the crowd at the Australian Open in Melbourne this week. What followed was an exercise in farce control, as journalists hungry for a story seized on social media criticism to portray the incident as “Twirlgate”.

The villain of the pantomime was Ian Cohen, a reporter from the shouty school who does the sort of low-level courtside interviews with players immediately after a match that would not be out of place in a holiday camp.

Bouchard, one of the rising stars of women’s tennis, had just won a match on the Margaret Court Arena and complied, smiled and giggled - but looked as if she were taking part in someone else’s joke.

She said later: “It was very unexpected. I mean, yeah, I don’t know ? An old guy asking you to twirl? It was funny.”

Cohen started the running sketch by asking the world No1, Serena Williams, a keen follower of fashion with her own label, to “do a little twirl” to show off some her colourful outfits. “Serena is good at her twirls,” Bouchard said. “She does them all the time.”

When told that Williams was championing a new look in tennis gear with backless dresses, Bouchard smiled and replied: “She must know, like, what’s coming up in fashion and stuff. Maybe I should cut a hole in my top tonight and show off my back like Serena.”

Although it all seemed innocent enough, if juvenile, there has been no shortage of indignation since, much of it unconvincing harrumphing in the tabloid press. The local Herald-Sun fumed: “Channel 7 [the rival media company covering the Australian Open] has been slammed around the world after the incident, which comes a year after the network also came under fire for asking Bouchard about Justin Bieber. ”

The “slamming” seemed to be coming mainly from within - and on Twitter, the modern waste basket of opinion, prejudice and nonsense.

Wendy Tuohy in the Herald-Sun, added: “Imagine the disgust if a female reporter had asked Rafael Nadal or Roger Federer to jiggle their behind for the cameras. I know, it wouldn’t happen. Yet anything goes when it comes to the young women players in a game whose sexism is entrenched from the top down - with even the best, most crowd-drawing women still receiving much lower prize money than the men.

“Demeaning treatment of women players is so widely accepted that some players feel they can say what they like with little fear of censure. In tennis coverage, the looks (and love lives) of the ‘girls’ are dissected like supermodels.”

Tuohy added: “Last year at the Australian Open Bouchard was asked about a reported link with Justin Bieber. Nice. At the same event French star Jo-Wilfried Tsonga said the reason the women’s tour is less predictable is because female players [‘girls’]are more ‘unstable’.”

There is sexism in sport but it is often seized upon in tennis because it is a sport split by gender, men and women having their own governing bodies and tournaments, with women receiving less prize money and some men complaining about their intrusion, taking up practice time at big events, especially the four grand slam tournaments.

When Andy Murray appointed Amelie Mauresmo as his coach last summer to replace Ivan Lendl, many players voiced their reservations, some more loudly than others - including the Australian Marinko Matosevic.

Known with slightly patronising affection as “Mad Dog”, Matosevic lost to Andy Murray in the second round in Melbourne on Wednesday, and repeated later his objection to female coaches on the grounds that men’s and women’s tennis were “two totally different sports”. Meanwhile, the head of the Russian tennis federation, Shamil Tarpischev, last year referred to Serena and Venus Williams as “the Williams brothers” on Russian TV.

The BBC’s John Inverdale took a long time to recover from his clumsy observation during Wimbledon in 2013 that Marion Bartoli, who eventually won the title, was “no looker”. Inverdale and Bartoli subsequently worked alongside each other at the French Open for ITV, and, as expected, there was hardly a mention of the words that ignited another media bonfire.

Then this week, British No1 Heather Watson lost her second-round match in Melbourne, collapsing in the second set when gripped by nausea - although she was soon to discover that her attempts in the post-match press conference to disguise the cause of her brief inconvenience with vague answers would only stir the curiosity of the media.

She let slip that it was a “girl thing” and the mostly male tennis media gave the story new life. There were also think pieces about the effect of menstruation on performance and radio interviews with major players, including former world No1 Martina Navratilova. Late on Thursday, Watson refused a request for another interview. What had been a private matter was now very public property and a lingering embarrassment.