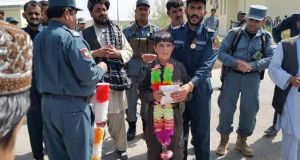 Wasil Ahmad was paraded in a police uniform to celebrate his bravery after the Taliban siege of Oruzga, Afghanistan, was lifted last year. On Monday, as Wasil walked out of the house to buy vegetables, an armed man on a motorcycle shot him twice in the head and escaped, his uncle said. Photograph: New York Times/social media

The Afghan government declared Wasil Ahmad a hero for leading a militia’s defence against a Taliban siege last year, parading him in front of cameras in a borrowed police uniform too big for him. On Monday, the Taliban triumphantly announced that they had assassinated him with two bullets to the head.

Wasil Ahmad was 10 years old. He was gunned down in Tirin Kot city, the capital of southern Oruzgan province, just a few months after leaving militia life and enrolling in school as a fourth-grader.

Wasil’s story is a painful example of how child combatants continue to be a part of life in Afghanistan, both in the ranks of pro-government forces and among the Taliban insurgents.

Rafiullah Baidar, a spokesman for the Afghan independent human rights commission, said that despite strict orders from President Ashraf Ghani last year against using children in the military, his commission continues to receive reports of child soldiers in the Afghan forces, particularly in the Afghan Local Police militias. The Taliban, he said, used child soldiers, too, in recent fighting in places like Kunduz and Badakhshan, in the northern part of the country.

Baidar said the provincial government had broken the law by parading Wasil in a police uniform after the Taliban siege was lifted. But he also condemned the Taliban’s killing of Wasil because the boy had moved to a civilian life. “There was no threat from this child to the armed opposition,” Baidar said. “If they had targeted him in a military base, then they could have raised the question of what was a child doing in a military base. But he was targeted in front of his home.”

Life of the gun

Samad’s forces became the government’s front against the Taliban. He lost 18 men in the fighting, including Wasil’s father. Last summer, as the Taliban intensified its offensives across the country and the security in Oruzgan deteriorated, the noose around Samad’s fighters tightened, the Taliban besieging them for more than two months, Samad said in an interview.

About a month into the siege, a Taliban attack wounded Samad and 10 of his men. Wasil took command of the defence, Samad said. “He fought like a miracle,” Samad said, adding that Wasil had fired rockets from a roof. “He was successfully leading my men on my behalf for 44 days until I recovered.”

The siege was finally broken in August, and Afghan and Nato forces airlifted Samad and his forces to a hero’s welcome in Tirin Kot. In a celebration hosted by Rahimullah Khan, the deputy police chief of Oruzgan, Wasil was the centre of attention, wearing a baggy police uniform with garlands of plastic flowers around his neck. Khan patted him on the back as they posed for pictures. Then the deputy chief went around with wads of cash, handing it to the rescued men. Pictures of Wasil – helmet on, assault rifle in hand – circulated widely on social media.

“He was not really interested in education because he was highly encouraged by police officials and awarded medals for his bravery,” said Ezatullah Khan, a former neighbour of the family’s. Mohammad Karim Khadimzai, the provincial council chief of Oruzgan, said he had disagreed with the police’s promotion of Wasil and his actions, even though the boy had bravely stepped forward at a desperate time during the Taliban’s assault.

“A programme was held at the police headquarters, where his bravery and courage was talked about by officials,” Khadimzai said. “I was against this move and told the officials that instead of encouraging him to military activities that will ruin his future, let him go to school. He is too young to hand him a gun.”

On Monday, as Wasil walked out of the house to buy vegetables, an armed man on a motorcycle shot him twice in the head and escaped, his uncle said. The boy was buried in Tirin Kot, in the Shahidano graveyard. He left behind two younger brothers.

The Taliban claimed responsibility on their website, saying they had killed a stooge militiaman.