Sydney gunman known to police but not on terror watch list

People lay flowers and write in condolence books in memory of those killed in a siege in Sydney. Video: Reuters

Australian security forces on Tuesday stormed the Sydney cafe where several hostages were being held at gunpoint, in what looked like the dramatic denouement to a standoff that had dragged on for more than 16 hours. Video: Reuters 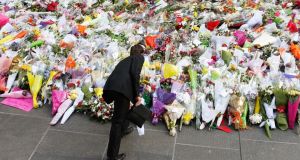 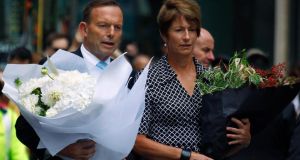 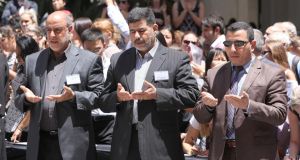 Members of the community arrive at the Martin Place vigil to pay their respects. Photograph: Jennifer Polixenni Brankin/Getty Images 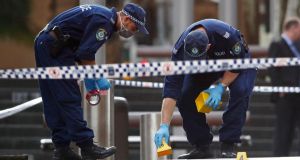 The gunman at the centre of the siege at a Sydney cafe was not on a terrorism watchlist, Australia’s prime minister has said, as police began a wide-ranging investigation into the events.

Three people died after the 16-hour siege came to a dramatic end when armed police stormed the building.

The 50-year-old “lone gunman” at the heart of the hostage crisis, Iranian refugee Man Horan Monis, was also pronounced dead in hospital.

New South Wales Police said a 34-year-old man and a 38-year-old woman were declared dead after being taken to hospital.

Police are investigating whether the two hostages were killed by the gunman or died in the crossfire, said Andrew Scipione, police commissioner for the state of New South Wales. Around 2am local time (1500 GMT on Monday), at least six people believed to have been held captive in the Sydney cafe managed to flee after gunshots were heard coming from inside.

Police then moved in, with heavy gunfire and blasts from stun grenades echoing from the building. “They made the call because they believed at that time if they didn’t enter there would have been many more lives lost,” Scipione told reporters just before dawn.

One of the hostages killed during the siege was Katrina Dawson, a barrister and mother of two who worked in Sydney’s central business district, while the man has been named as Lindt cafe manager Tori Johnson.

“Katrina was one of our best and brightest barristers who will be greatly missed by her colleagues and friends,” Jane Needham, president of the New South Wales Bar Association, said.

At least four were wounded, including a policeman hit in the face with shotgun pellets. Among the wounded was a 75-year-old woman who was shot in the shoulder, police said.

Two pregnant women who were among the hostages were taken to hospital for assessment. All were in stable condition.

Medics tried to resuscitate at least one person after the raid, a Reuters witness said. Bomb squad members moved in to search for explosives, but none were found.

So far 17 hostages have been accounted for, including at least five who were released or escaped on Monday.

Shortly after laying flowers near the scene, prime minister Tony Abbott labelled radical group Islamic State a “death cult” and told a press conference there were questions to be answered over why Monis was freed on bail.

He said: “This has been an absolutely appalling and ugly incident — that’s the only way to describe it. Our hearts go out to the families of Katrina Dawson and Tori Johnson. These were decent ordinary people who were going about their ordinary lives.

“Decent, innocent people who were caught up in the sick fantasy of a deeply disturbed individual.”

He added Monis had “certainly had been well known to the Australian Federal Police. but I don’t believe that he was on a terror watch list at this time.”

She said: “He was on bail and in terms of that matter, his movements will form part of the critical investigation.

“He has clearly made some statements. This is a man who had a serious history of offences and a history of violence. A man we do believe had some extremist views and we also believe he was unstable.

“We will clearly have a look at all the things we can find out about him so we can determine what might have triggered anything.”

She refused to speculate on the actions of the cafe manager, when asked if he had acted heroically.

Earlier, police commissioner Andrew Scipione told reporters in Australia’s biggest city that 17 hostages had been accounted for in total, including five who escaped early in the attack.

“It was the act of an individual. This should never change or destroy the way of our life. This won’t change our lives, this will not change the things we hold dear in this country.”

The officer said the Lindt cafe had been secured and no explosive devices were found.

He urged people not to “speculate” about what had happened, adding that police believed more lives could have been lost had they not taken action.

“Events that were unfolding inside the premises led them to the belief that now was the time to actually deploy, and they did,” he said.

“I understand there were a number of gunshots that were heard, which caused officers to move towards an emergency action plan.”

Local media reports suggested that commandos from the Royal Australian Regiment had entered the building after the gunman started firing shots.

In addition to the wounded police officer, two women were taken to hospital with non-life threatening injuries and one woman was taken as a precaution.

Ms Burn also said she had spoken to the officer, who had been discharged from hospital.

“What I can say about him is I’ve spoken to him this morning. He was on his way home actually and he was a little bit shaken. His only words to me were I will be back at work tomorrow,” she said.

Police confirmed that a number of hostages had “traumatic injuries” and some had “medical conditions”.

Uninjured hostages are now expected to be interviewed as part of a critical incident investigation by police.

Flags at government buildings will be flown at half-mast in the wake of the tragedy, prime minister Mr Abbott announced.

The end of the siege came soon after the hostage taker was named as self-styled Muslim cleric Monis.

Born Manteghi Bourjerdi, Monis arrived in Australia in 1996 as a refugee, changing his name to Man Haron Monis and assuming the title of Sheikh Haron.

He had attracted attention in recent years by writing offensive letters to the families of Australian soldiers killed in Afghanistan.

Dubbed the “hate sheikh”, he was sentenced to 300 hours of community service for writing the letters.

He was also banned in 2010 from sending “letters of condolence” to the families of British soldiers killed in that conflict.

Monis was also on bail as an alleged accessory to the murder of his ex-wife and for a string of sex claims, police confirmed.

During the stand-off he was said to have demanded to have a flag of the Islamic State militant group delivered to the cafe.

But his former lawyer said he believed Monis had acted alone and was not part of a terrorist conspiracy.

Manny Conditsis told the ABC: “This is a one-off random individual. It’s not a concerted terrorism event or act. It’s a damaged goods individual who’s done something outrageous.

“His ideology is just so strong and so powerful that it clouds his vision for common sense and objectiveness.”

Adam Houda, a well-known Sydney solicitor who had also represented Monis, described him as “mad as a cut snake”.

Fearing a backlash against Muslims, Australians offered to transport them on public transport and showed their support on Twitter with the hashtag #illridewithyou.

Lindt & Sprungli, the company whose cafe was at the centre of the hostage crisis, said it was “profoundly saddened and deeply affected” by the death of innocent people.

“We are devastated by the loss of their lives and that several others were wounded and had to experience such trauma,” the company said.

“Our thoughts and feelings are with the victims and their families who have been through an incredible ordeal, and we want to pay tribute to their courage and bravery.”

New South Wales coroner Michael Barnes said families would be offered support as a post-mortem examination got under way.

He said: “Counsellors from the Department of Forensic Medicine will provide counselling and support for any of the bereaved relatives who wish to receive it.

“The state coroner will conduct the inquest as soon as reasonably practicable. At this early stage it is not in a position to identify the issues that will be considered at the inquest.

“The state coroner and staff of the coroners court offer their condolences and respects to the bereaved families and friends of the victims of this tragic event.